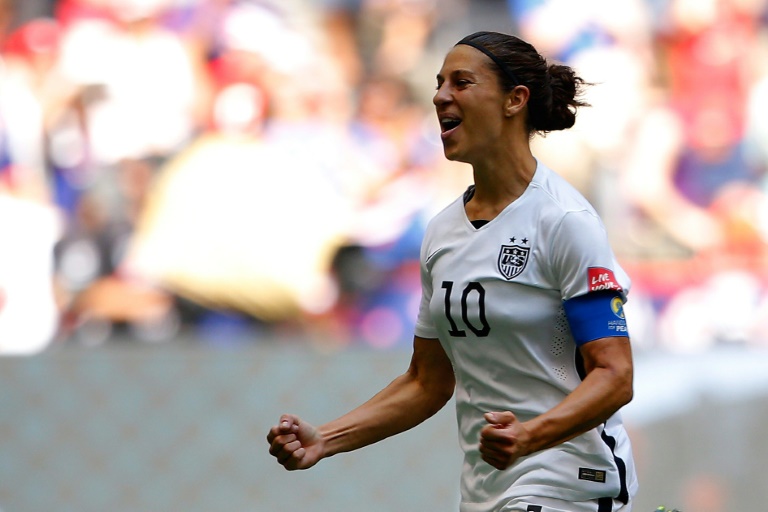 American women’s star Carli Lloyd will take on Lionel Messi for the Puskas Award, the prize for the best goal of the year, world governing body FIFA said Friday.

National captain Lloyd scored a hat-trick as the United States defeated Japan 5-2 in July’s World Cup final in Vancouver with one of the goals a spectacular lob from the centre of the pitch.

Lloyd, already the favourite for the women’s Ballon d’Or award, is looking to succeed another woman, Stephanie Roche of Ireland, who won last year’s Puskas Award.

Messi has been nominated for his goal for Barcelona against Athletic Bilbao in the Spanish Cup final which saw the Argentine star weave his way past four defenders as well as the goalkeeper before scoring.

There are, in total, 10 nominees for goal of the year with the winner announced at the Ballon d’Or ceremony on January 11 next year.

One is for David Ball whose 25-yard strike for Fleetwood Town in an English third division game made the cut.

“It’s great for that goal to even be put in the same bracket as the ones which have been shortlisted,” Ball said on the Fleetwood website.

“I’m obviously shocked to have been shortlisted and it’s a great thing for Fleetwood Town Football Club and myself.

“The likes of Carlos Tevez and Lionel Messi are people I love watching. To be in the same category as them is something I’ll cherish forever.”