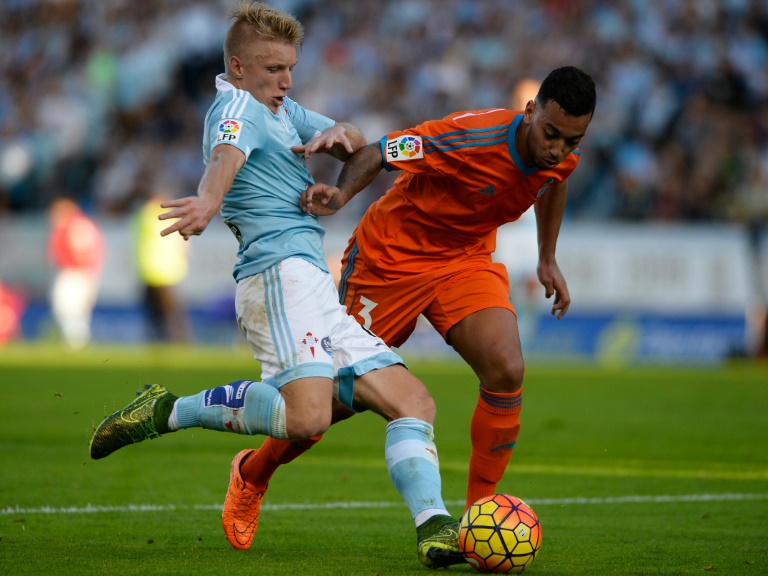 Valencia eased the pressure on coach Nuno Espirito Santo with by far their best result of the season to thrash Celta Vigo 5-1 at Balaidos on Saturday.

Paco Alcacer and Dani Parejo both struck twice before Shkodran Mustafi added a late header to lift Valencia to within two points of the top four.

Victory takes Valencia up to sixth, three points behind Celta in third.

Celta had started the day with the chance to move level with Real Madrid and Barcelona at the top of the table.

By contrast, Valencia travelled to Galicia with rumours surrounding Nuno’s future after a dreadful performance in losing 1-0 to Gent in the Champions League on Wednesday.

True to form, Celta dominated the majority of the match, but they suffered just their second defeat of the season thanks to some brilliant Valencia finishing and comical defending from the hosts.

Alcacer had once again been named in Vicente del Bosque’s Spain squad on Friday despite scoring just once from open play all season.

However, he justified the former Real Madrid coach’s faith by sweeping home Parejo’s pass for the opener on 12 minutes.

The home side were then outraged when they had the ball in the net again moments later, but referee Inaki Vicandi Garrido had already blown for a Celta free-kick on the edge of the area.

Parejo turned the game on its head just before half-time with a stunning free-kick that found the top corner.

Seconds into the second-half it was 3-1 as Alcacer pounced on a short back-pass from Jonny to coolly slot home his second of the afternoon.

Alcacer then turned provider for Parejo to score the fourth before Mustafi added a fifth from a corner 13 minutes from time.

League leaders Real Madrid and Barcelona are both in action on Sunday in their final match before they clash in El Clasico on November 21.

Madrid travel to Sevilla, whilst Barcelona host fifth-placed Villarreal at the Camp Nou.