Home World The Godfather gets African look for Mali exhibition 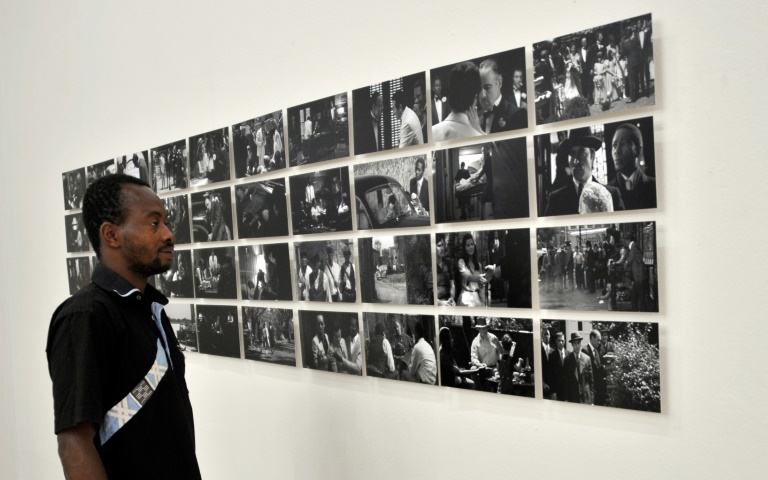 A closer inspection of the photo series reveals one important addition, however: black characters.

Nigerian artist Uche Okpa-Iroha has pasted himself into scenes from the 1972 movie for “The Plantation Boy”, a photo exhibition causing a stir in Mali — and bemoaning the paucity of African American actors in Hollywood.

“The intervention is a tribute, as well as an investigation, into how movies affect the individual and society,” he says in a blog post explaining the photo-essay.

“Many movies are based on true stories and facts, but are replayed by actors who, by leaving traces of their own emotions and identities, blur out the differences between real, fantasy and fiction.”

Okpa-Iroha photographed himself in a studio in his home town of Lagos for the 2012 series and then added his image into the original film stills.

Across 40 pictures, he can be seen taking part in the iconic wedding scene, plotting with crime boss Don Corleone and his associates, and stashing a gun for a gangland hit.

The Biennial — returning after a cancellation in 2013 brought on by Mali’s political and security crisis — is spread over several locations across the city, but its beating heart is the national museum.

In the gardens of the museum, Fatoumata Diabate throws a cloth over her head and antique camera before taking a portrait of a young girl as visitors arrive for the first day of the exhibition.

“I use this camera, which dates from the 1960s and is called a ‘view camera’,” says the Malian photographer, who readily admits preferring to create her art the old-fashioned way.

Beside her makeshift studio there are wigs, dark sunglasses and other props — “to flavour the sauce” says Diabate — smiling as her pictures do steady business.

The theme this year is “Telling Time”, an English-language title with a deliberate double-meaning which can signify “telling someone the hour of the day” or “a significant epoque”.

It is inspired in part by the country’s recent turmoil, when jihadists linked to Al-Qaeda seized the towns and cities of the desert north with the help of Tuareg rebels in the wake of a military coup.

The jihadists quickly sidelined their Tuareg allies but were themselves ousted by a French-led military intervention launched in January 2013.

Democracy was restored following elections in the summer of that year but large swathes of the northern desert remain beyond the control of Malian security forces and their foreign allies.

“Telling Time allows one to look at the present, to examine what happened in Mali and its results, in order to regenerate and heal, and to move forward,” says Bisi Silva, the Nigerian artistic director.

“But we are also going to talk about the present after the revolution in Burkina Faso, a neighbour of Mali, and about the Arab Spring… We will then look to the future,” she adds.

In total, 26 photographers and around a dozen video artists are exhibiting at the Biennial, staged in Bamako every two years — notwithstanding the northern conflict — since 1994.

The “Jury Favourite” prize, awarded by the French Institute, which co-produced the Biennial with the culture ministry, went to two South African video artists — Lebohang Kganye and Simon Gush.

Kganye was rewarded for an exhibition on her family history, while Gush won with an exploration of the urban landscape of Johannesburg.

“These individuals in helmets without faces that you see in my photos, like a ghost army or soldiers, are a reflection of our own fears,” Traore told AFP.

“Thanks to the Biennial, Mali is catching its breath,” said Samuel Sidibe, general delegate of the event.

“The country will not remain mired in crisis. We are once again the African capital of an important event which is beginning to becomes global,” he told AFP, noting the presence of European and even American journalists.

The Biennial runs until the end of the year.