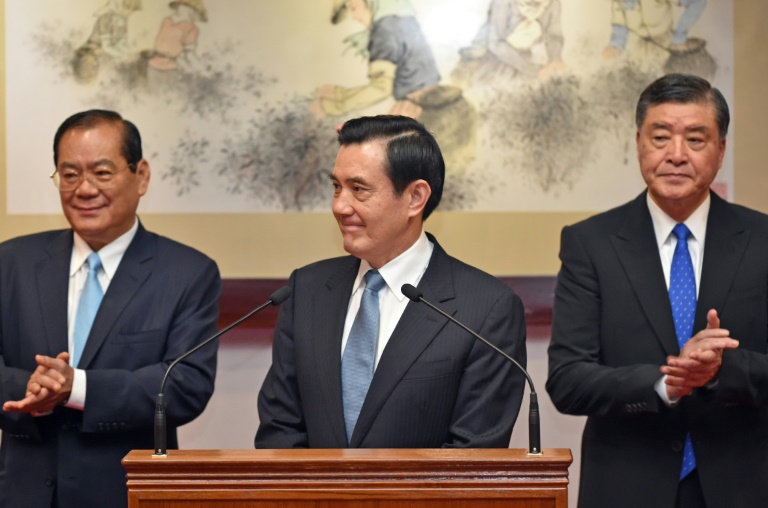 The leaders of China and Taiwan hold a landmark summit Saturday that will put a once unthinkable presidential seal on a historic rapprochement between the former Cold War rivals.

The meeting between Chinese President Xi Jinping and Taiwan’s Ma Ying-jeou is the first between leaders of the two sides since their 1949 split following a civil war won by the Chinese Communists.

In the decades that followed, China endured Communist revolutionary tumult followed by its reinvention as an economic colossus, while Taiwan evolved into a prosperous and rambunctious democracy.

But a technical state of war existed for 30 years after the divorce and both sides of the Taiwan Strait still bristle with weaponry as growing economic relations are yet to fully dispel decades of deep distrust.

Since Beijing-friendly Ma took power in 2008, however, a historic thaw began that will see a key milestone with the summit on neutral ground in Singapore.

The 1949 rupture left a wound in the Chinese psyche that both sides have yearned to address for decades, and when Xi and Ma first meet at a luxury hotel around 3:00 pm (0700 GMT) it will be with a handshake that bears deep resonance back home for both sides.

They are then expected to hold talks behind closed doors for an hour.

But decades of political sensitivities are not swept away easily and both Xi and Ma will be treading a fine political line in an unprecedented first meeting of leaders whose governments have long formally denied each other’s legitimacy.

“Avoiding a setback in cross-Strait relations will take the concentrated efforts of both leaders,” Douglas H. Paal, a former head of the American Institute of Taiwan — the de facto US embassy — wrote in an analysis note for the Carnegie Endowment.

“As any political pro would say, the optics of the visit could prove very important to the message that emerges.”

Under a strict protocol, neither will address each other as “president”, instead using “mister”, and they will hold separate back-to-back press conferences before attending a banquet.

Ma also has said no agreement will be signed nor any joint statement issued, seen as a bid to assuage fears in Taiwan that Beijing was gaining too much influence over the island under Ma’s presidency.

Ma, however, has expressed hope that the meeting could boost Taiwan’s clout on the international stage, where it has been marginalised by an ascendant Beijing, which pressures countries not to recognise the Taipei government.

Taiwan lost its United Nations seat to China in 1971 and only 22 states formally recognise the island, a key point of resentment for Taiwanese.

Opponents accuse Ma, who leaves office soon, of trying to boost his ruling Kuomintang’s (KMT) chances at presidential elections in January, which the Beijing-friendly party is tipped to lose.

With the economy flagging, many voters feel they have not reaped the benefits of the rapprochement, resentment that adds to a growing sense of a distinct Taiwan identity, and have been deserting the KMT at the polls.

Overnight Saturday, around 100 angry protesters tried to storm Taiwan’s parliament but were stopped by police, while demonstrators also gathered at Taipei’s Songshan airport.

Ma, however, defends his China policy as having brought stability to the region.

Despite the improving relations, China repeatedly denied Ma’s attempts to secure a face-to-face meeting, prompting questions over why the green light was finally given now.

Many analysts say it is designed to boost the ailing KMT, but warn that it runs the risk of backfiring with an anxious Taiwanese electorate if Beijing is seen as meddling in the election outcome.

The summit also is interpreted by some as aimed at drawing attention away from aggressive Chinese expansionism in the South China Sea, which is causing rising concern in the region, and instead casting Beijing as a peacemaker.