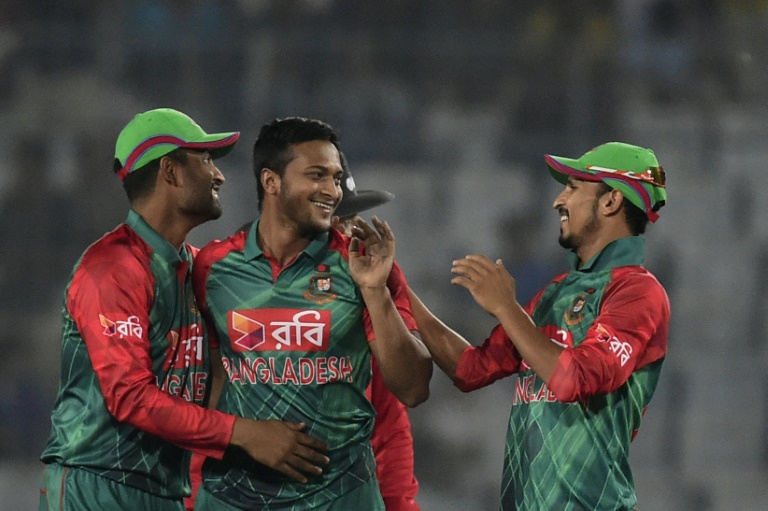 Shakib Al Hasan grabbed his maiden five-wicket haul and Mushfiqur Rahim hit a fine century as Bangladesh crushed Zimbabwe by 145 runs in the first one-day international in Dhaka on Saturday.

Set a daunting target, Zimbabwe were never up to the task after Shakib claimed three wickets in his opening spell to leave the visitors struggling at 65-4.

Skipper Elton Chigumbura made 41 runs, the most of any Zimbabwean, before he was the ninth batsman dismissed having been judged leg-before to Nasir Hossain.

Zimbabwe’s last man Richmond Mutumbami was unable to bat after he hurt his ankle while wicket-keeping in the opening innings of the game.

Bangladesh skipper Mashrafee Mortaza claimed 2-13 as the home side took a 1-0 lead in the three-match series.

Mortaza praised both Shakib and Rahim for their performances.

“It’s really obvious they have been contributing for Bangladesh cricket from the start of their careers. You expect them to deliver their best at tough times,” he said after the match.

“I want the youngsters to learn from them. I always believe that when my experienced players step up, the match becomes easier to win.”

Sabbir Rahman earlier made 57 off 58 balls to provide support to Rahim, who hit nine fours and a six in his fourth ODI century.

The pair added 119 runs in their fifth wicket partnership after Zimbabwe reduced Bangladesh to 123-4 at one stage.

Bangladesh were off to a shaky start in the three-match series as new opener Liton Das got out for a duck. He flashed medium pacer Luke Jongwe and offered a catch at point to Graeme Cremer.

Tinashe Panyangara then bowled Mahmudullah for nine before Tamim Iqbal and Rahim repaired the innings with a patient 70-run third wicket partnership.

Off-break bowler Sikandar Raza had Tamim caught by Jongwe at long-on for 40 and soon he got rid of Shakib (16), who was stumped by wicketkeeper Mutumbami.

Rahim pushed Taurai Muzarabani towards long on to complete his century before he was run out with a direct throw by Cremer from backward point.

Chigumbura lamented the last two overs of their bowling when they conceded 28 runs.

“I thought we were in control when we were fielding. Maybe we gave them too many (runs) in the last couple of overs after the way we brought it back following Mushfiqur’s dismissal,” he said.

“I thought it was still a chaseable score despite the last two overs. I think we gave them 15-20 runs more than we wanted.”

Raza claimed 2-47 while Muzarabani finished with 2-64 for Zimbabwe. The second match of the series will be held at the same ground on Monday.