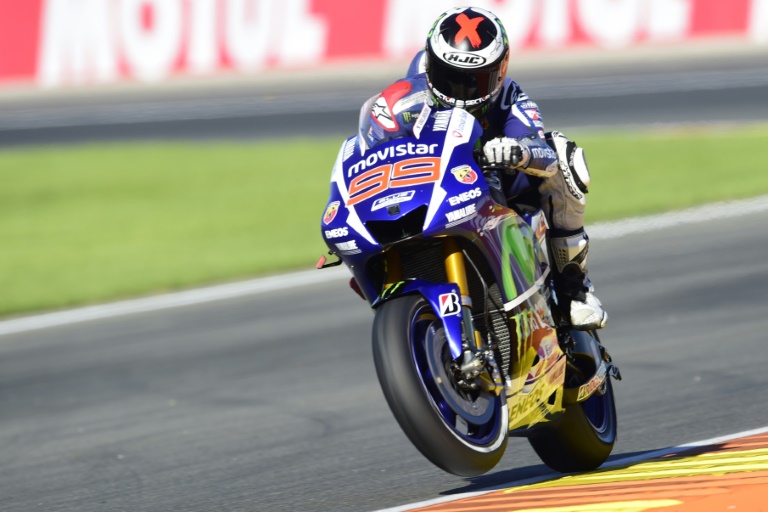 Jorge Lorenzo made the perfect start as he aims to beat Yamaha teammate Valentino Rossi to the MotoGP world title at the season-ending Valencia Grand Prix by going fastest in practice on Friday.

Rossi, who leads Lorenzo by seven points in the championship standings, will start from the back of the grid in Valencia after kicking defending champion Marc Marquez off his bike at the Malaysian Grand Prix two weeks ago.

The nine-time world champion’s appeal to the Court of Arbitration for Sport against the sanction was rejected on Thursday.

Lorenzo’s time of 1min 31.111sec was nearly four tenths quicker than Rossi, who could only register the fifth fastest time of the day.

“I’m riding well, but the bike, to be honest, is working very well for me to keep a high pace, even with old tyres, so Iâ€™m very happy about the beginning of the weekend.”

Rossi will practically have an extra practice session during qualifying on Saturday, but said he will most likely stick to his normal routine on race weekend.

“I’m quite happy about these two first practices because already this morning my pace was not so bad and I was also quite competitive with the used tyre, which is very important for the race,” he said.

“We have to decide our strategy now because I think it will be difficult to use the 15 minutes of qualifying like a free practice, so I think maybe I can do the normal procedure anyway.”

President of the Federation of International Motorcycling (FIM), Vito Ippolito, added his voice to the calls for a more sporting spectacle in Valencia than occurred in Malaysia a fortnight ago.

Ippolito said he hoped that the sport is the winner no matter who emerges victorious in the championship race.

However, he did appear to lend some support to Rossi by claiming that contact was part and parcel of MotoGP otherwise the championship would be a series of “processions not races.”

Marquez admitted earlier in the week it had been impossible to prepare for the final race of the season as normal after the controversy.

The collision and subsequent sanction caused outrage in both Spain and Italy with even the Prime Ministers of each country intervening to back their respective countrymen.

Marquez and some of his entourage were also involved in a scuffle with two Italian journalists at his Catalan home last weekend.

And the 22-year-old admitted it was a relief just to be back on the track on home soil.

“I’m happy because I went out on track and got back to enjoying myself riding; it was important and something I was really looking forward to doing,” he said.

The Honda rider shrugged off those concerns to register the quickest lap in the first practice session of the day.

However, Marquez couldn’t improve on his morning run in the second session leaving him 0.139sec off Lorenzo’s time in second.