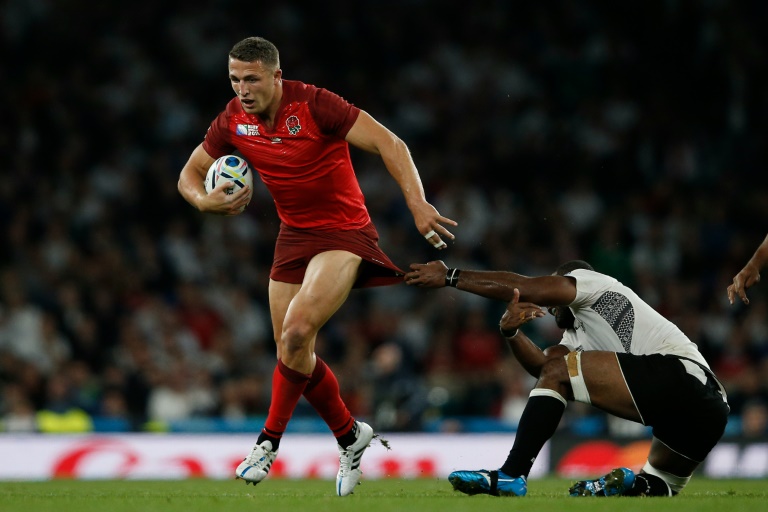 As if presiding over the first host nation to suffer a pool-phase exit at a World Cup was not bad enough, Sam Burgess’s return to rugby league after just a year in rugby union will further undermine England coach Stuart Lancaster.

It was always asking a lot of Burgess, heading back to the South Sydney Rabbitohs, barely 12 months after helping the club win the Australian NRL Grand Final, to become a fully fledged union international in such a short space of time.

And it became all the more difficult when, in the absence of a central contract, club side Bath and England saw his union future in two different positions.

Bath played him mainly as a flank forward, while England saw him as an inside centre — a key playmaking position in the backline.

Because the two rugby codes are played with an oval-shaped ball, it is easy to think the only key difference between them is that there are 15 players in a union team and 13 in a league one.

Yet while a tackle in league sees play halted, in union it is the start of a contest for possession.

Meanwhile the line-out, another important area for union forwards, simply does not exist in league.

Burgess, trying to master two of union’s most demanding positions and a complex rulebook, made just one start and two appearances off the bench during the World Cup.

He certainly did not cost England a quarter-final place. In the key defeat by Wales, having done an admirable defensive job and been a useful decoy runner in build-up to a try, his side were leading when Burgess came off only for the Welsh to rally late on.

But his undeniable physical power and presence could not disguise his lack of ease in his England role, with veteran Ireland centre Gordon D’Arcy’s withering critique that Burgess “doesn’t know how to play inside centre” sadly proving all too accurate.

That Burgess’s inclusion in the World Cup squad came at the expense of experienced centre Luther Burrell, who up until the tournament had been one of the mainstays of Lancaster’s three years as England coach, all added to the sense of a needless gamble.

There was a hope in some quarters that Burgess might do for Lancaster what fleet-footed former rugby league star Jason Robinson did for Clive Woodward’s World Cup-winning England side of 2003.

Robinson, however, was a wing, a position in which there is the least difference between the two codes, and he had two years of international rugby union behind him when England won the World Cup.

“What happened really was he (Burgess) was asked to play either at flanker for his club or centre for England — two of the most difficult positions to play rugby, with a constant 80 minutes of decision-making,” former England union fly-half Stuart Barnes told Sky Sports.

“It’s not a mark of failure for Burgess not to have cracked it in under a year.”

Barnes added: “What it does do is question England’s blind determination to force him in, when it was always going to be a race against time.”

For all that England assistant coach Andy Farrell, another cross-code convert, was in the firing line over Burgess’s rapid promotion, Lancaster — bidding to stay in post as England review a woeful World Cup campaign — will have to carry the can.

“I don’t think he was the most convinced of the England coaches about the qualities of Sam Burgess for this year, but the fact is Stuart Lancaster had the final say and he selected him in the 31 (man squad).”

So long as union remains the higher profile international sport, more league players can be expected to switch codes — the traffic was all the other way when union was an amateur game.

But they must hope for more sympathetic treatment, and above all, more time than England gave Burgess or, indeed, Burgess gave himself.