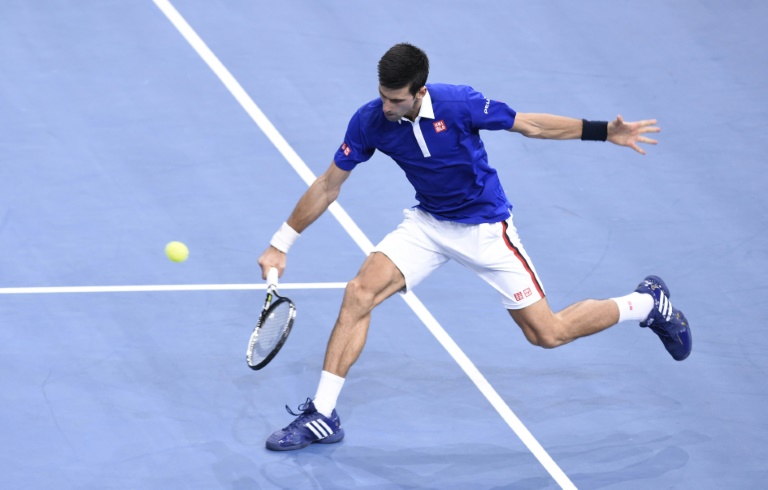 Andy Murray and David Ferrer also made it through to the last four in the bottom half of the draw.

The straight sets victory for world number one Djokovic also meant that he has now won 28 sets in a row — the best run of his career — dating back to the US Open final in early September.

But he had a battle on his hands against fifth-seeded Berdych, a winner in Paris 10 years ago when he was just 20.

Despite having lost all 16 of their previous hardcourt matchups, the towering Czech had the better of the first set behind a powerful display of serving and forehand blockbusters.

He kept his nose in front and his chance came with a set point at 6-5 up only for Djokovic to produce a big first serve and a forehand winner off the blocked return.

The tie-break, however, was dominated by the Serb winning four of the first five points to take control.

Serves again dominated in the second set with both men holding firm to bring up a second straight tie-break which Djokovic edged 10/8 despite Berdych having another set point.

Djokovic will play the winner of the remaining quarter-final opposing Rafael Nadal and Stan Wawrinka for a place in Sunday’s final.

The other semi will oppose second seed Murray against 2012 champion Ferrer.

Murray made the last four of the Paris indoors for the first time, but it needed a marathon effort to see off the last remaining Frenchman, Richard Gasquet.

Five times previously Murray had fallen in the quarter-finals of the ATP’s regular season finale.

“I think the level during the first set was extremely good,” Murray said.

“After that it was a little bit up and down. But I just managed to hang in at the end after losing the momentum really in the second set.”

The win meant that Murray joined Roger Federer, Nadal and Djokovic as the only players to reach the semi-finals or better at all nine of the Masters 1000 Series tournaments during their career.

But the big-serving American, who defeated Federer in the previous round, suddenly found some form with his returns to break back and then draw level at 5-5.

Isner jumped out into a 5-2 lead in the tie-break before Ferrer pulled back, but it was the American who levelled the set scores against all the odds.

The effort though took its toll on Isner who dropped serve early on in the decider and then needed lengthy courtside treatment for stomach pain.