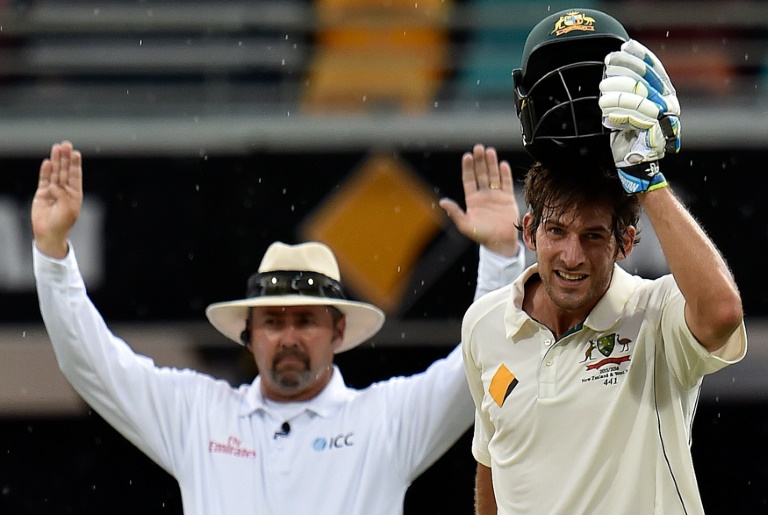 Joe Burns smashed two sixes off three balls to reach his maiden Test century and completed back-to-back tons as amassed a huge lead over in the first Gabba Test on Saturday.

Burns, playing in only his third Test match but his first as opener, blasted spinner for two sixes over long off to race from 88 to 100 in three balls.

When bad light stopped play, had stretched their overall lead to 503 runs at 264 for four and an overnight declaration imminent with first-innings centurion not out nine and on one.

Burns, who was finally out for 129 off 123 balls with 14 fours and four sixes, thrilled his home crowd with some prodigious hitting to reach his first Test ton after three consecutive Test half-centuries.

Warner sprinted to his second century of the match with 116 before he gave his wicket away with a switch hit off spinner .

It was only the third time that a batsman has scored a Test century in both innings on three separate occasions along with and .

It was also the first time any opening pair had compiled 150-run plus partnerships in each innings of a Test match.

It was remarkable scoring by the Test rookie and even relegated the usually rapid-scoring Warner to a supporting role against the under-strength Kiwi bowling attack, which was minus pace spearhead , off the field with a back injury.

It was the fourth century of the Test after Warner (163) and Khawaja (174) in Australia’s first innings and Kane Williamson’s defiant 140 in New Zealand’s innings.

Skipper Steve Smith completed a low scoring match when he was given out for one to a close-to-the-ground catch by Williamson off Trent Boult that needed a lengthy umpire’s review.

The Australians earlier dismissed the Black Caps for 317 with Williamson the last man out.

Williamson’s defiant innings ended when he was caught behind, giving his fourth wicket of the match.

He was congratulated by the Australian players as he left the field after his 178-ball knock speckled with 24 fours.

It was Williamson’s 11th Test century and one of his best after centuries against Sri Lanka, Pakistan, West Indies, England, India, Bangladesh and South Africa in his five years of playing Test cricket.

The 25-year-old right-hander also became only the fourth Kiwi to score a Test hundred at the Gabba along with John Reid, Martin Crowe and Jacob Oram, with his 140 marking the second highest score by a New Zealander at the ground behind Crowe’s 188.

Williamson played a lone hand for the Black Caps as wickets toppled around him on the third day.

Wicketkeeper BJ Watling added 67 runs for the sixth wicket with Williamson before he fell to the first ball of Mitchell Johnson’s opening over of the day.

He dabbled outside the off-stump and edged to Peter Nevill for 32 off 59 balls to leave the Kiwis at 185 for six.

Craig resisted for 46 minutes before he miscued spinner Nathan Lyon to Mitchell Marsh at point for 24 leaving Williamson at the crease on 86.

Doug Bracewell, dropped by Voges on four, went on the fourth ball after lunch, bowled by Marsh for 16 to bring the injured Tim Southee to the crease.

Southee hit out lustily before he was bowled off-stump by Starc for 14 off as many balls.

Starc claimed the scalp of Williamson to finish with four for 57 and fellow left-arm paceman Johnson captured three for 105.