Home Sports Warne, Tendulkar want to mimic Beckham in US 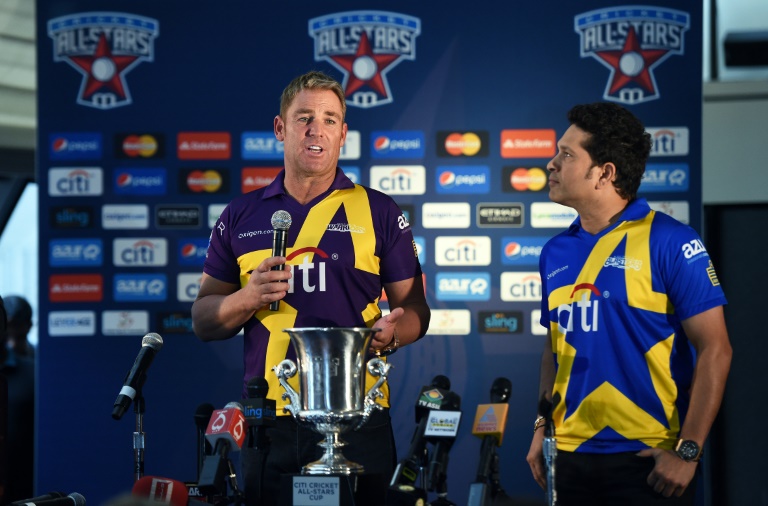 David Beckham is the millionaire model, sportsman and nice guy credited with helping make soccer more popular in the United States. And now Shane Warne wants to do the same for cricket.

The Australian spin king has jetted into New York with Indian batting great Sachin Tendulkar to embark on an exhibition tour designed to get baseball-loving Americans up to speed with a sport few of them understand, play or ever watch.

“Soccer wasn’t big. David Beckham came over here and suddenly the sport is starting to grow,” Warne told reporters at a hotel in Times Square ahead of the first All-Stars game on Saturday.

Cricket is second only to soccer in terms of world popularity, he said, no matter that baseball and American football reign supreme in the United States.

“We don’t think it’s a gamble, we think Americans are ready,” said Warne in a nod to his sideline as a poker player.

Warne and Tendulkar will captain two All-Star sides — Warne’s Warriors and Sachin’s Blasters — that will showcase the talents of some of the greatest stars in world cricket, playing three Twenty20 three-hours games in New York, Houston and Los Angeles.

Tendulkar, who offers a softly-spoken bookish counterpart to Warne’s tell-it-how-it-is drive, said their dream was to one day see an American team in the World Cup.

“We’re here to establish cricket in America” he said. “The next time we come here it would be nice to find an American kid with a cricket bat in his hand alongside a baseball bat.”

They will be doing cricket clinics for young children, interact with players as much as possible and invite women cricketers to their practise sessions as well, he said.

They may have retired and not be as quick as they were 10 years ago, but they insist they’ve lost none of their skills — or their competitive streak.

“We’re going to go out there and play as hard as we possibly can, and we’re going to win. Simple as that,” said Warne.

“We’re good friends, but not on the field,” said Tendulkar. “We want to go out and not disappoint the fans… We want to win the hearts of as many people as possible here.”

The ICC-sanctioned matches will be played on drop-in pitches at major baseball fields in New York, Houston and Los Angeles.

A portion of the proceeds will go to the ICC for the development of cricket within the United States.

Warne said the response “had been overwhelming” and if all goes well, it could become an annual event.

“Hopefully it will go on for a long time,” he said.

He batted aside suggestions that the rules of cricket were too complicated for Americans to follow.

But many of the spectators are expected to be expatriates from cricket-loving nations. The vast majority of the reporters at Thursday’s press conference were from overseas.

New York, one of the greatest metropolises on earth has a wealth of expatriates from England, Australia, South Africa and the West Indies.

Its metropolitan area is home to the largest concentration of South Asians in the United States from India, Pakistan and Bangladesh where cricket is a national obsession.