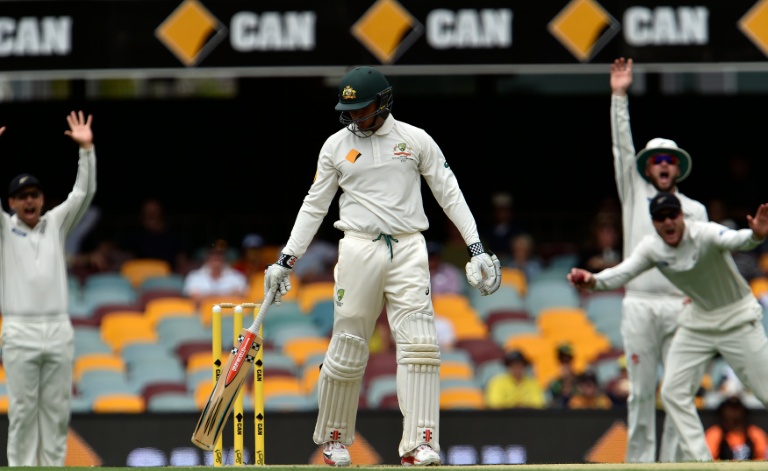 New Zealand claimed the prized wicket of Australia skipper Steve Smith but lost pace spearhead Tim Southee to injury in a serious blow on the second morning of the first Gabba Test on Friday.

At lunch, Usman Khawaja had advanced to 133 with Adam Voges on 50 in Australia’s total of 482 for three.

The Black Caps bowled better lines and their field placements returned to traditional settings early on the second day after Thursday’s battering by Australia.

They won an early reward with the scalp of the world’s second-ranked batsman Smith for 48.

Trent Boult, bowling much better than Thursday’s innocuous efforts, removed Smith with a beautiful in-swinger which clipped the off-bail.

Smith only added seven runs to his overnight score and the Black Caps celebrated a triumph of sorts after going to first day stumps at 389 for two.

The disciplined Kiwis restricted the Australian scoring to just 39 runs in the first hour after Thursday’s frenetic rate, but they added 54 more runs in the second hour.

The tourists suffered a setback when Southee pulled up with a back disc injury after delivering the last ball of his 24th over. He left the field with the team trainer.

Southee had a scan overnight and his probable loss for at least the remainder of Australia’s first innings would have a significant impact on Kiwi hopes of damage limitation.

Voges scored an effortless third Test half-century nearing lunch, while Khawaja added 31 runs to his overnight tally in steady going as the Gabba pitch quickened on the second morning.