Home Sports Records under threat as Manning returns to Colts 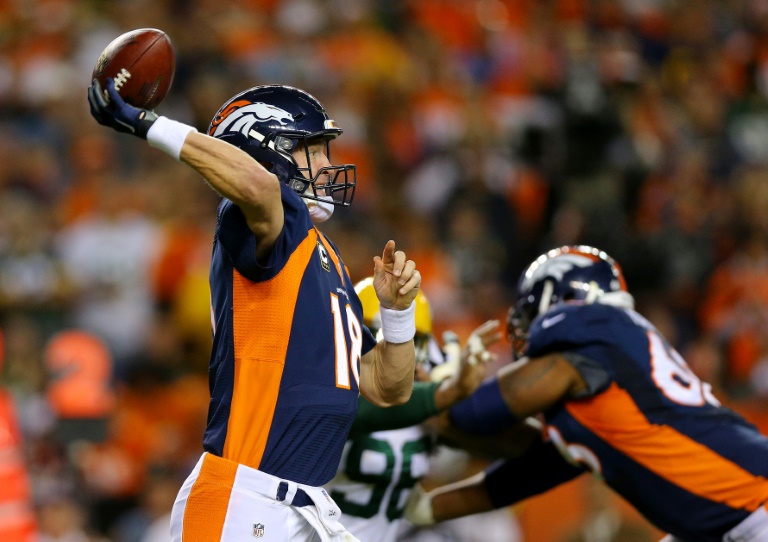 Peyton Manning is poised for a record-breaking return to Indianapolis on Sunday as the veteran quarterback aims to extend Denver’s unbeaten start to the season while inflicting more pain on his former employers.

Manning, 39, could overhaul two of the NFL’s most revered all-time records on Sunday if the Broncos offense fires on all cylinders against the spluttering Colts at the Lucas Oil Stadium.

Manning needs just 284 passing yards to surpass Brett Favre’s haul of 71,838 while one more victory will see him move clear of the Green Bay Packers legend with the most wins by a starting quarterback in history with 187.

Watching their prodigal son break those milestones in Indianapolis — where Manning played for 14 seasons — would be bittersweet for Colts fans, who have watched their own team stumble to a 3-5 start this season.

Although Manning has not yet found his best form this year, it has been more than good enough, allied to the best defense in the NFL, to give the Broncos a 7-0 start.

Manning insists he views Sunday’s return as just another game, adamant he has not given any thought to the possibility of rewriting the record books.

“I really haven’t given any thought to things that haven’t happened,” Manning said.

“I really just focus on the old, boring cliche, one game at a time. And with all that’s changed this year, with all the newness that we have, you absolutely have to focus on the now and not look too far ahead and focus and continue to communicate and stay on the same page.

“That’s been a good approach for me.”

Yet Manning’s Denver team-mates insist the veteran quarterback is determined to prove a point on his return to Indianapolis, after losing there with the Broncos on his only other visit in 2013.

“Being able to get that win for him in Indy, that’s huge.”

Manning’s successor at the Colts, Andrew Luck, has struggled this season and suffered further on Monday in an overtime loss to the Carolina Panthers.

The Colts responded to that defeat by firing offensive coordinator Pep Hamilton on Tuesday, leaving assistant head coach Rob Chudzinski with the task of trying to unlock the Broncos formidable defense.

Luck admitted the Broncos defense forced opponents to “really fight for every yard.”

“They certainly have a plan and they know what they are doing,” the quarterback said.

Elsewhere Sunday, Denver’s last victims — the Green Bay Packers — will attempt to bounce back from their first defeat of the season with a daunting assignment at the 7-0 Carolina Panthers in another key match-up.

The meeting between the two best teams in the National Football Conference could have a pivotal influence on deciding who has home-field advantage in the playoffs.

The Panthers insist they are a different team to the one which suffered a 38-14 drubbing at Lambeau Field last season.

“We were a completely different team, mentally. This year we’re a more confident group. We’re a better group. This is probably the best Carolina team, talent-wise, I’ve seen since I’ve been in the league.”

The unbeaten New England Patriots meanwhile attempt to preserve their 100 percent start to the season with what should be a straightforward assignment against the struggling Washington Redskins.

Quarterback Tom Brady has played down suggestions that the Patriots are driven by a desire to complete an unbeaten season as a riposte to the Deflategate saga which overshadowed the close season.

“That would be the furthest thing from anybody’s mind,” Brady said this week. “I (couldn’t) really care less about those type of things … We’ve got one mission, it’s this week. It sounds like a cliche but it’s not, because it works, and it’s what our team’s about. We’re short-term focused.”