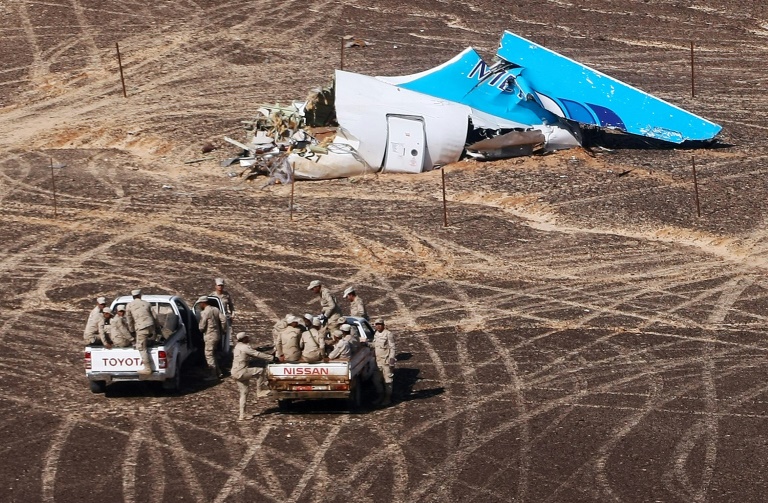 Russia ordered a halt Friday to flights to Egypt as concerns grew that a bomb downed a Russian plane after takeoff from its Sharm el-Sheikh resort, while British carriers started to evacuate holidaymakers.

President Vladimir Putin called the halt to Russian flights, the Kremlin said, in line with a recommendation from his security chief, although Moscow had downplayed reports that a bomb caused the crash last Saturday.

A first flight finally took off for London’s Gatwick airport after a long delay, followed shortly by another plane headed for Britain.

But there were angry scenes at the airport as thousands of anxious Britons who had also hoped to fly home were sent back to their hotels after Egypt blocked several other repatriation flights.

Britain’s ambassador, John Casson, was heckled as he announced the news.

“When are we going home?” shouted one Briton forced to spend another night in a Sharm hotel. “We donâ€™t know whatâ€™s happening.”

Egypt’s aviation minister, Hossam Kamal, said only eight out of 29 flights would take off because the airport could not cope with all the luggage left behind.

In a sign of mounting fears about the security of baggage handling in Egypt, Dutch carrier KLM announced that it had banned check-in luggage on an early flight from Cairo, mirroring moves taken by several European airlines on Sharm flights.

The Islamic State (IS) jihadist group has claimed responsibility for the disaster, in which the Saint Petersburg-bound jet last weekend crashed minutes after taking off, killing all 224 mainly Russian tourists on board.

Cairo has sought to downplay the suggestion of an attack.

But President Barack Obama told a US radio station: “I think there is a possibility that there was a bomb on board and we are taking that very seriously,” while emphasising it was too early to say for sure.

At an emergency meeting in Moscow, the head of Russia’s FSB security service, Alexander Bortnikov, said it would be prudent to halt flights for now.

“Until we have determined the true reasons for what happened, I consider it expedient to stop flights by Russian aviation to Egypt,” Bortnikov said.

In London, where Prime Minister David Cameron hosted Egyptian President Abdel Fattah al-Sisi on Thursday, the British premier told reporters it was “more likely than not that it was a terrorist bomb” that caused the crash.

And The Times newspaper reported on Friday that electronic communications intercepted by British and US spies suggested a bomb may have been carried onto the plane.

A joint intelligence operation used satellites to uncover the chatter between militants in Egypt’s restive Sinai Peninsula and Syria, it said.

“The tone and content of the messages convinced analysts that a bomb had been carried on board by a passenger or a member of the airport ground staff,” the newspaper reported, without giving a source.

Egypt’s foreign ministry told AFP on Friday that the analysis of the black boxes and wreckage had yet to finish,”

“Time should be given for the analysis. The minute that the analysis is ready it will be made public,” ministry spokesman Ahmed Abu Zeid said.

He said Egypt had beefed up security at airports to “give confidence to the British government, but that does not mean we concur with any scenario.”

The aviation minister, Kamal, said there was “as yet no evidence or data confirming the theory” of an attack.

Sisi sought to use his trip to London to allay fears over the safety of tourists in Egypt after several nations suspended flights to and from Sharm el-Sheikh.

There is no global or European blanket ban and some flights, including all Russian ones before Putin’s order on Friday, have continued from the airport.

But France and Belgium have warned citizens against travelling to Sharm el-Sheikh and Britain has advised against all but essential travel by air to or from the resort.

The British government authorised flights to resume from the resort on Friday to bring home an estimated 20,000 British tourists.

But thousands were turned away after Egypt blocked British tour operators from flying in empty aircraft to make up the backlog.

Those passengers who did fly out were allowed to carry hand luggage only, with their check-in bags to follow separately.

Joining a string of airlines in avoiding Sharm el-Sheikh, the Lufthansa Group announced its subsidiary Eurowings would halt flights between Germany and the Red Sea resort, while Turkish Airlines also cancelled two flights.

If it was behind the attack, it would be the first time IS, which controls large areas of Syria and Iraq, has attacked a passenger plane.

It has the potential to deeply damage Egypt’s tourism industry, still struggling to recover from a turbulent four years following its 2011 revolution.