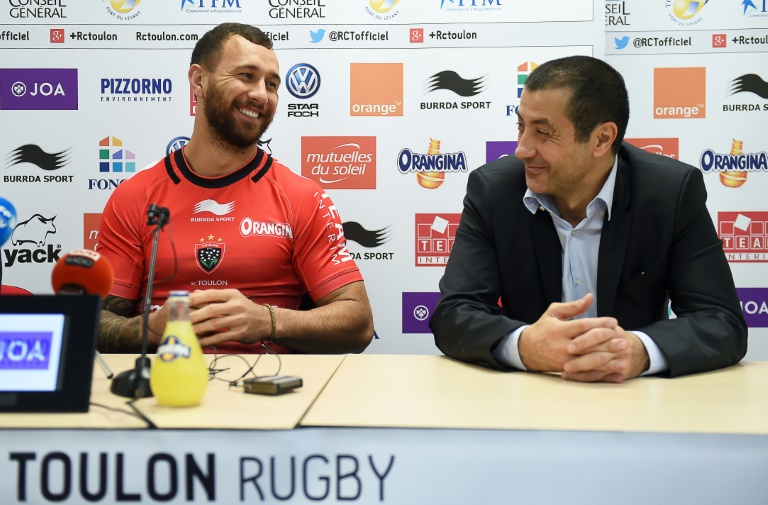 European champions Toulon will be looking to maverick fly-half Quade Cooper to kick-start their season at home to Montpellier on Saturday.

The reigning three-time European champions come into the Top 14 clash in eighth place in the 14-team top flight having lost four of their opening seven matches.

The big-spending giants’ squad was ravaged by World Cup absences during the first part of the season but will be able to count on Cooper this weekend.

Cooper’s Australia international teammate Matt Giteau has been given time off to recover from his World Cup exploits, Frenchman Frederic Michalak is injured and South African Willie du Plessis is on his way to second-division Bayonne after his short-term contract as World Cup cover ended.

It leaves former Queensland Red Cooper as the only senior specialist fly-half in Toulon’s ranks.

And his inclusion could not come soon enough with the team already 11 points behind Top 14 leaders Clermont.

Toulon president Mourad Boudjellal claimed on Thursday that he would quit if the team does not finish in the top six, and thus reach the end of season play-offs.

While Boudjellal, as is often his want, no doubt was merely trying to make headlines, the chances of his team remaining outside the leading places for much longer is very slim.

New Zealand’s World Cup winners have mostly been given more time off than everyone else but Toulon will eventually be able to count on Ma’a Nonu in their midfield that already boasts Frenchmen Mathieu Bastareaud and Maxime Mermoz, as well as the versatile Giteau.

South African pair Bryan Habana and Duane Vermeulan, as well as Wallabies James O’Connor and Drew Mitchell would also come in at some point to bolster the Toulon armada.

It would be a major shock if they didn’t finish in the top six with something to spare — as it is, they’re only one point behind anyway.

Cooper isn’t the only returning World Cup star likely to line up against fourth-placed Montpellier as Argentina flanker Juan Martin Fernandez Lobbe should start with Georgia prop Levan Chilachava set to take his place on the bench.

Cooper only made one appearance at the World Cup as Bernard Foley’s impressive form kept him inactive — he didn’t even make the 23-man squad for last weekend’s final.

“I wish it was Saturday today and I could strap on the boots and run out to play today,” he said when presented to the media on Tuesday.

“I just want to get out there and do it. It also helps having such world class players around you.”

In other games, struggling champions Stade Francais host Clermont in a match that could prove a turning point for the capital outfit.

They come into it a point off the bottom after losing five of their opening seven matches — only promoted pair Agen and Pau sit below them.

President Thomas Savare admitted that his side had not managed the World Cup period very well.

“The other teams did a better job of negotiating this delicate and unusual period,” he said.

But Savare believes there is still much to play for.

“I hope we’ll soon rediscover our level of play and that we’ll get out of the doldrums to go and fight for a top six place,” he added.

Stade’s first task will be to try to stop a rampant Clermont attack that has already plundered 26 tries and five attacking bonus points this season — compared to Stade who have managed only half as many tries for no attacking bonuses.

In other matches, second-placed Racing 92 travel to 2013 champions Castres, who are down in 10th, while record four-time European champions Toulouse, who won at Montpellier last week, host Grenoble, who felled Toulon last time out.