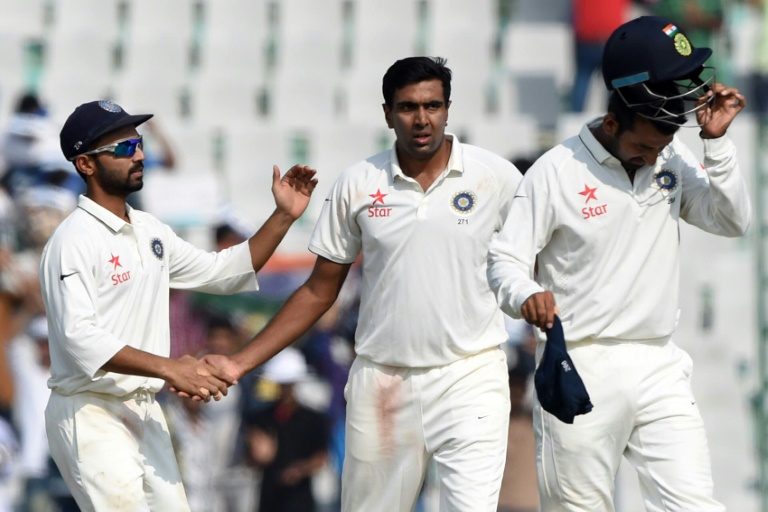 India, shot out for 201 in the first innings, hit back to bowl the Proteas out for 184 in the post-lunch session on a dusty, dry pitch at the I.S. Bindra stadium.

The hosts went to tea on 13-1 in their second innings, taking a 30-run lead with nine wickets in hand in conditions that are tailor-made for the bowlers.

Murali Vijay was unbeaten on 11 and Cheteshwar Pujara was on two after Shikhar Dhawan bagged a pair when he was caught in the slips off Vernon Philander for zero.

Ashwin finished with five for 51, reaching the 150-wicket mark in his 29th Test with the dismissal of last man Imran Tahir.

AB de Villiers (63) and skipper Hashim Amla (43) were the only visiting batsmen to offer resistance after Dean Elgar’s 37 as the rest failed to reach double figures.

De Villiers was lucky to cross seven after television umpire Vineet Kulkarni ruled that Jadeja had bowled a no-ball when the batsman was caught in the slips by Indian captain Virat Kohli.

Elgar and Amla put on 76 for the third wicket to take the score to 85-2 before the last eight wickets crashed for 99 runs.

Elgar, whose part-time left-arm spin had bagged four wickets on the first day, made 37 when he top-edged an attempted pull shot off Ashwin to Jadeja at point.

Amla appeared to be finding form after a lean patch in the one-day series before Ashwin had him stumped as the batsman stepped out of the crease to smother the spin and missed the line of the ball.

Four balls later, Jadeja took a fine running catch at backward point to get rid of Dane Vilas and reduce the Proteas to 107-5.

Jadeja and Mishra shared the next four wickets, including the vital one of de Villiers, who was bowled by the leg-spinner to be ninth out.