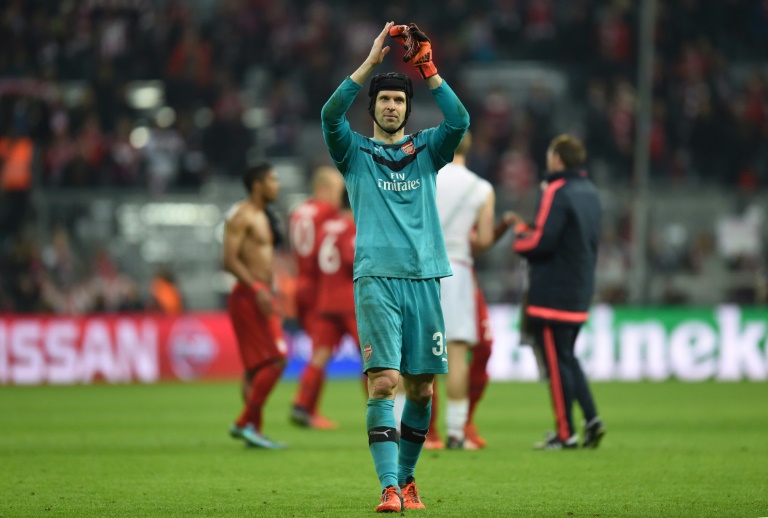 Petr Cech insists shell-shocked Arsenal will make amends for their Champions League meltdown by winning this weekend’s north London derby, while troubled Jose Mourinho has received a welcome boost from midweek hero Willian ahead of Chelsea’s tricky trip to Stoke.

Arsene Wenger’s side suffered a potentially fatal blow to their chances of making the last 16 in Europe’s elite club competition after crashing to a dismal 5-1 loss against Bayern Munich on Wednesday.

The Gunners’ joint-heaviest European defeat leaves them in severe danger of missing the knockout stages for the first time in 16 years.

But veteran goalkeeper Cech knows they have a chance to erase those painful memories when they return to Premier League action against arch rivals Tottenham at the Emirates Stadium on Sunday.

“Every game comes thick and fast and you have to make sure you recover and move onto the next one,” said Cech, whose second placed team have won their last five league matches and are behind leaders Manchester City on goal difference.

“The defeat to Bayern is tough to take but in a way you have to accept the team you played was superior to us in everything they have done.

“In terms of the league, you have to make sure you are ready for the next game.”

Fifth placed Tottenham’s hopes of avenging their League Cup loss against Arsenal earlier this season won’t be helped by their gruelling schedule over the last week.

Mauricio Pochettino’s team beat Aston Villa on Monday then hosted Anderlecht in the Europa League on Thursday, leaving them with little recovery time before facing Arsenal.

“We need to take the schedule and not complain about that,” Pochettino said.

“It’s true this is not the best condition but we need to be ready and we need to take the excuse away from the players.”

Mourinho will remain firmly in the spotlight when Chelsea visit Stoke on Saturday, even though the beleaguered Blues boss won’t actually be at the Britannia Stadium.

The 52-year-old isn’t allowed any contact with his team as he serves a one-match stadium ban following his half-time dismissal at West Ham last month.

It will be fascinating to see how Chelsea’s players respond to Mourinho’s temporary absence given the numerous reports of a dressing room mutiny against the manager.

The crisis-torn English champions are languishing in 15th place, although Mourinho got some much-needed breathing space on Wednesday with a vital 2-1 win over Dynamo Kiev in the Champions League.

Brazil winger Willian, whose sublime free-kick saw off Kiev, insisted results will continue to improve, starting at Stoke, who recently knocked Chelsea out of the League Cup.

“Confidence is coming for us and the results are coming as well,” Willian said.

“We have to keep going and keep fighting on the pitch. We lost some games and it’s been difficult for us but we are trying to play better.”

City secured their place in the Champions League last 16 with two games to spare thanks to an impressive 3-1 win at Sevilla in midweek.

In contrast, Villa were beaten for the ninth time in 11 league matches this season as former Lyon boss Garde watched from the stands at Tottenham on Monday ahead of the official start of his reign.

“I am confident, it’s 28 games to go. If we start winning things will change,” Garde said of Villa’s chances of avoiding a first relegation since 1987.

Naturally, City manager Manuel Pellegrini has no intention of extending a warm welcome to Garde on the pitch and he called on his players to maintain their momentum.

“I think we must continue with the same personality as this and work the same in Europe and the Premier League. I don’t divide the competitions. I have a team and I want to play as we did in Seville,” Pellegrini said.