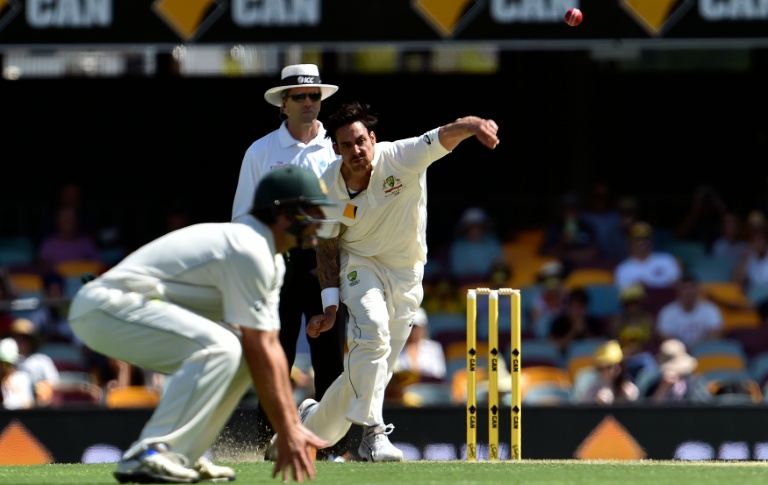 Australia’s pace demons Mitchell Johnson and Mitchell Starc ripped apart New Zealand to put the home side on course for victory in the first Test at the Gabba on Friday.

At the close, the Kiwis were holding on at 157 for five in reply to Australia’s 556 for four and looking down the barrel of defeat with three days still to play.

Kane Williamson was leading the resistance with an unbeaten 55, with wicketkeeper B.J. Watling providing support on 14.

The Black Caps steadied after losing four wickets for 16 runs at one stage against the pace and fire of Johnson and Starc.

Martin Guptill had a life, put down on 12 by Joe Burns, before he was snapped up low down at third slip by off for 23.

The Black Caps lost four wickets in 25 balls when Starc had caught by Lyon at point for 47 and then struggling went for a seven-ball duck.

Johnson angled one across Taylor’s body and took a regulation catch at second slip.

Skipper Brendon McCullum lasted just six balls before he fell to the fired-up Johnson, getting a healthy edge to at first slip for six.

James Neesham was beaten by Starc’s searing pace and had his stumps spreadeagled for three to continue the carnage.

Steve Smith called a halt to Australia’s first innings following the dismissal of Usman Khawaja an hour before tea.

Khawaja was out to a reverse sweep, spooning part-time spinner Williamson to Guptill at backward point for 174.

Khawaja virtually gave away his wicket as word came out from the team dressing room of an impending declaration to end his 239-ball knock containing 18 fours and two sixes.

Voges remained marooned on an effortless 83 off 127 balls, tantalisingly close to his first Test century.

It was a relief for the beleaguered Kiwis to get off the ground after 565 minutes and 130.2 overs, most of the second day without their injured pace spearhead Tim Southee.

Southee pulled up with a back disc injury after delivering the last ball of his 24th over in the morning session. He left the field with the team trainer.

It remains to be seen whether Southee will bowl again in the Gabba Test if required. The Black Caps have called in paceman Neil Wagner as back-up.

The Black Caps bowled better lines and their field placements returned to traditional settings early on the second day after Thursday’s battering by Australia.

They won an early reward with the scalp of the world’s second-ranked batsman Smith for 48.

Trent Boult, bowling much better than Thursday’s innocuous efforts, removed Smith with a beautiful in-swinger which clipped the off-bail.

Smith only added seven runs to his overnight score and the Black Caps celebrated a triumph of sorts after going to first day stumps at 389 for two.