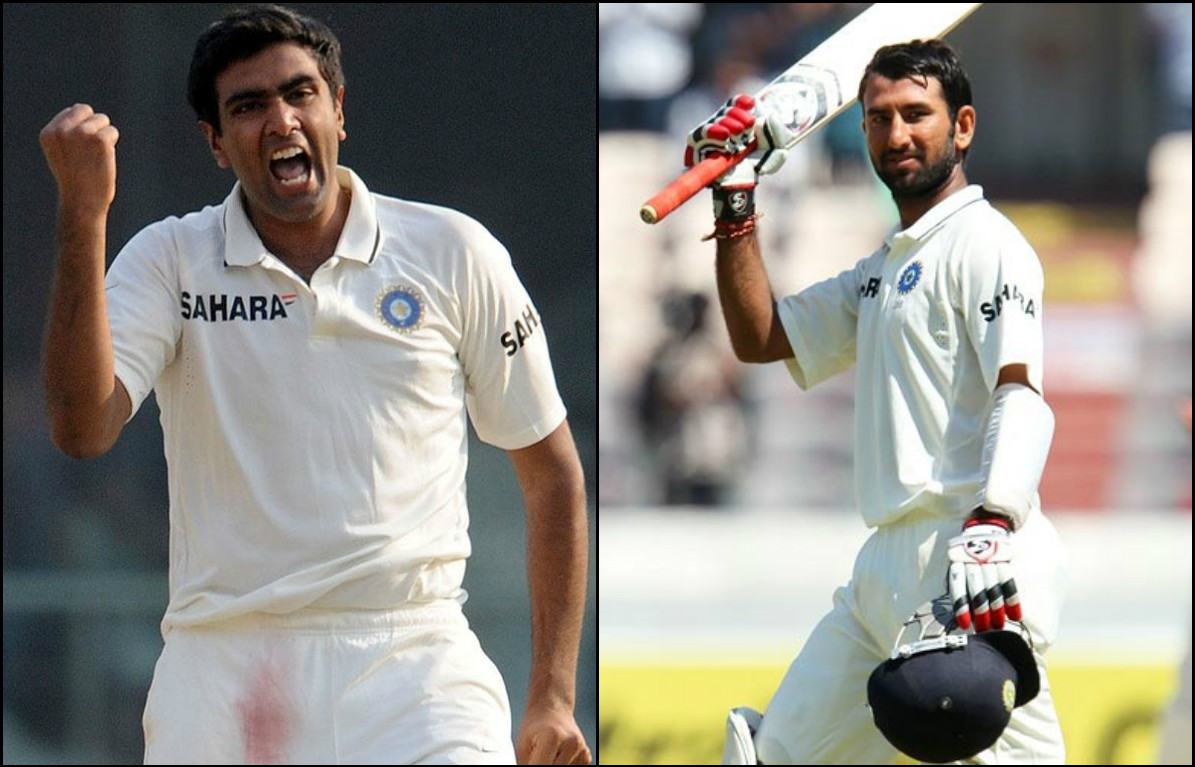 Mohali: Premier off-spinner Ravichandran Ashwin bagged a five-wicket haul to give India a slender first innings lead before the batsmen consolidated the position with a much-improved display in the second innings against South Africa on day two of the first cricket Test on Friday.

After eking out a crucial 17-run lead courtesy Ashwin’s impressive figures of 5-51, India were 125/2 at stumps with Cheteshwar Pujara (63) and Virat Kohli (11) at the crease. The hosts have stretched the lead to 142 runs.

It was the second-wicket pair of Murali Vijay (47) and Pujara, which played sensible cricket with a 86-run stand after Shikhar Dhawan (0) lost his wicket second time in a row without bothering the scorer.

Vijay’s 105-ball toil though was brought to a disappointing end by leg-spinner Imran Tahir in the final half-hour of play.

The visitors felt the absence of pace spearhead Dale Steyn, who was rested for the session as a precautionary measure for his strained groin.

Skipper Hashim Amla kept juggling his pace and spin options in the final session of play but suddenly the devil in the pitch at the IS Bindra Stadium seemed to have disappeared as both Vijay and Pujara counter-attacked effectively.

After Dhawan was caught at second slip in a repeat of his first-innings dismissal in the second session, Tahir gave the visitors the much-needed breakthrough with a googly that got danger man Vijay back in the pavilion.

But it was a dismissal that was made possible by substitute fielder Temba Bavuma’s marvellous diving catch at forward short-leg to deny Vijay, who got his 1000 Test runs in his 12th game, his much-deserved fifty.

Pujara though did not falter in getting his seventh Test half-century after pulling part-time spinner Dean Elgar, who became an unlikely hero on the opening day with a four-wicket haul, for a boundary.

Pujara also tonked Tahir for the first six of the match in the final over of the day.

De Villiers’, who managed a fighting 83-ball 63, had raised hopes of his team overpowering India’s first innings total of 201, but the Indian spin force did the trick.

Ashwin once again emerged the leader of the pack to bag 150 wickets in his 29th match.

Ashwin, who had sent opener Stiaan van Zyl (5) back in the pavilion on the opening day, got the prized wickets of overnight batsmen Elgar (37) and Amla (43) and followed it up scalping Dane Vilas (1) and Tahir (4).

With the visitors in trouble at 127 for five at lunch, Jadeja struck in the sixth over of the second session to send Philander (3) back in the pavilion with Ajinkya Rahane taking a sharp catch at first slip. Though, the umpire referred the decision upstairs, only to see that the ball was legitimate and the catch clean.

The session then saw a 34-run seventh-wicket partnership before Simon Harmer (7) departed after being trapped LBW off Mishra. The leg-spinner had another chance of getting a wicket a ball later but failed to take a return catch on new-man Dale Steyn’s full blooded hit.

After surviving a few anxious moments in the middle, De Villiers got into his own to hit six boundaries. The ODI skipper got to his 37th Test fifty with a whack off Jadeja in the mid-wicket region.

Steyn’s 14-ball patience took a walk when the pace spearhead jumped out to Mishra’s googly and was stumped by Wriddhiman Saha.

The big moment came for India in the 64th over when Mishra castled De Villiers on a delivery that came a bit quicker off the leg-spinners’ hand.

The day had started with Amla and Elgar stitching a 76- run third-wicket partnership before Ashwin spun a web around the Proteas line-up.

De Villiers also got a lucky reprieve in the 25th over of the day after Jadeja induced an outside edge off the star player’s bat and Virat Kohli took a clean catch after the ball lobbed off wicketkeeper Wriddhiman Saha’s gloves, but replays showed that the left-arm spinner had overstepped.

De Villiers had nearly returned when the umpires stopped him and repeated replays confirmed the no-ball, much to the visiting team’s delight.

But their joy was short-lived as Amla, who had batted well in his 97-ball stay, was stumped off Ashwin in the very next over. Three deliveries later Ashwin also got Vilas back in the pavilion to leave the visitors struggling.

Starting on their overnight score of 28 for two, Amla and Elgar mixed the right dose of caution and aggression to make steady progress.

If Mishra operated with a slip, leg-slip and short-leg and then Ashwin, who was introduced into the attack in the ninth over of the day, put pressure with two slips and a silly point to start with.

India had their moments after Elgar was dropped by Saha, albeit a tough chance for the wicketkeeper after the ball skid through the bat’s edge and Mishra’s first genuine LBW appeal against Elgar was turned down by Umpire Kumar Dharamsena.

Ashwin also tested Amla with his flight as one of them caught the right-hander’s inside edge only to fall short of leg-slip.

Ashwin finally got Elgar by forcing him to commit an error as the left-hander tried to slog sweep against the turn and ended up giving away a catch to backward point. Elgar’s hard-working 123-ball stay at the wicket was laced with just two boundaries.