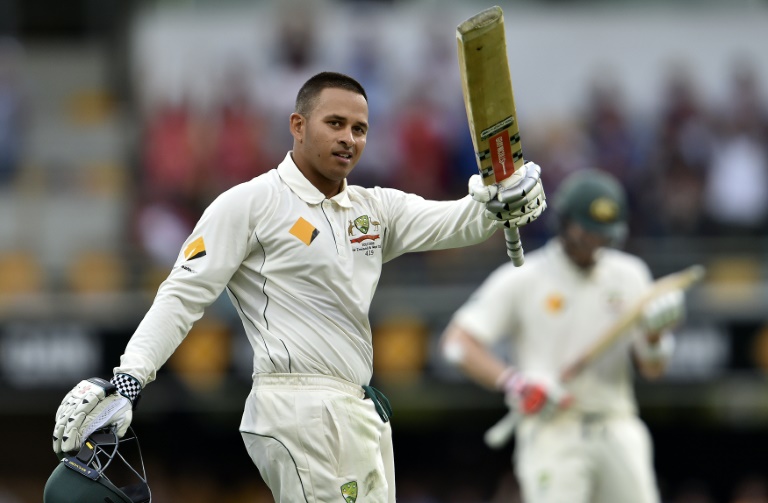 David Warner backed up his feisty words with runs as he hit his 13th Test century and Usman Khawaja claimed his maiden ton as Australia took an iron grip on day one of the first Test against New Zealand on Thursday.

The outspoken Warner, who had derided the Kiwis as “Mr. Nice Guys” and vowed an aggressive approach, lived up to his promise with his second-highest Test score against an underwhelming New Zealand attack at the Gabba.

With Warner plundering 163 runs off 224 balls, the Australians pounded the ragged Black Caps to go to stumps at 389 for two — their highest first-day score at the Brisbane ground.

Khawaja also cashed in, reaching his first Test century just before the close and finishing the day unbeaten on 102 with skipper Steve Smith not out on 41.

Along the way Smith raised 1,000 Test runs in the calendar year as Australia eased doubts about their new-look side after a host of retirements at the start of the three-match series.

“We knew if we could grind away and bring their strike bowlers back it’d make it a lot easier at the end of the day and I think the scoreboard reflects how well we actually played,” Warner said.

“With each individual we built big partnerships. I think it’s always important as an opening batsman just to come out here and do a good job.”

Warner was finally out to one of his few false strokes of the day, but it took Ross Taylor’s marvellous one-handed catch above his head at slip to snare the prized wicket off James Neesham.

The irrepressible left-hander smashed 22 fours and one six for his second-highest Test score, after his 180 against India in Perth almost three years ago.

Warner shared in two mammoth stands with Joe Burns (161) and Khawaja (150) to have the Australians in full flow at a ground where they have not lost a Test match since 1988.

Pakistan-born Khawaja deposited a huge down payment on a regular Test spot with a silky hundred after a stop-start career in his previous nine Tests since making his debut against England in Sydney in 2011.

The stylish Khawaja kept the runs flowing with his maiden Test ton off 123 balls after new opener Burns had shared in a substantial opening stand with Warner to overpower the Black Caps on the opening day of the series.

It was a bold statement from Smith’s unfamiliar Australian team, after the post-Ashes departures of former skipper Michael Clarke along with stalwarts Shane Watson, Chris Rogers, Brad Haddin and Ryan Harris.

The Australians scored briskly against the unthreatening bowling and shoddy fielding, clocking up their 300 at almost a run a minute.

It was a deflating opening day for Brendon McCullum’s Black Caps, who are looking for their first series win in Australia for 30 years.

“We’re obviously not in the ideal situation. If we hang in there for long enough, and take this game deep, we’ll see where it goes.”

Burns completed his third consecutive Test half-century before he edged Tim Southee to Watling for 71.

Burns, opening the innings after batting at number six in his previous two Test appearances against India last home season, made the most of his opportunity after being bypassed by selectors for this year’s Ashes series in England.

Skipper McCullum tinkered with some exotic field placements, even placing eight men on the off-side for Warner at one stage facing Southee, but to no avail.

Warner survived a review for leg before wicket off Bracewell on 39 after replays showed the ball pitching outside leg stump, and shortly after he smashed Bracewell straight over the sight screen for six.