Home World US, UK say bomb may have downed Russian jet in Egypt 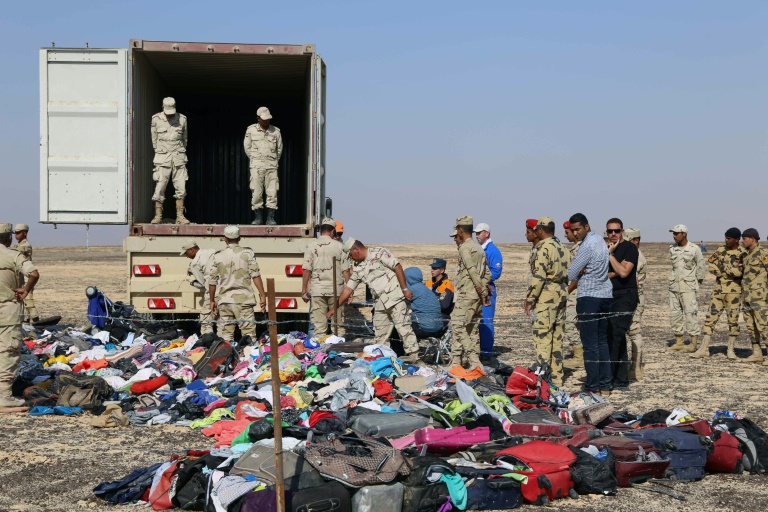 The United States and Britain said a bomb may have brought down a Russian airliner which crashed in Egypt, as the Islamic State group insisted it caused the disaster.

Britain and Ireland suspended flights to and from the Egyptian Red Sea resort of Sharm el-Sheikh, where the plane took off on Saturday bound for Saint Petersburg before crashing minutes later, killing all 224 people on board.

“A bomb is a highly possible scenario,” a US official told AFP. “It would be something that ISIL would want to do,” he added, using an alternate name for the Islamic State (IS) group.

British Prime Minister David Cameron’s office said that “as more information has come to light, we have become concerned that the plane may well have been brought down by an explosive device”.

The move comes as Egyptian President Abdel Fattah al-Sisi is set to hold talks with Cameron in London on Thursday, during his first visit to Britain since he led the army’s overthrow of his predecessor Mohamed Morsi.

In Russia, authorities are expected to bury the first victim of the crash — the country’s deadliest air disaster.

Moscow and Cairo both dismissed IS’s initial claim it brought down the Airbus A-321 in Egypt’s restive Sinai Peninsula, but the jihadists on Wednesday again insisted they were responsible and promised to reveal how.

If confirmed, it would be the first time the militant group, which controls vast tracts of Syria and Iraq, has bombed a passenger plane.

Egyptian officials said investigators probing the plane’s black boxes had extracted the data from one of them for analysis, but added the other had been damaged and required a lot of work.

In a new statement Wednesday, IS again insisted it had brought down the plane — and challenged sceptics to prove otherwise.

“Prove that we didn’t bring it down, and how it came down. We will detail how it came down at the time of our choosing,” the group said in an audio statement posted online.

The IS affiliate in Egypt is waging a bloody insurgency in the north of the Sinai Peninsula that has killed hundreds of policemen and soldiers.

On Wednesday, it claimed responsibility for a suicide car bombing on a police social club in El-Arish, which the official MENA news agency said killed four policemen.

IS has deployed shoulder-fired anti-aircraft missiles in the past, but they are not known to possess weapons that could bring down an airliner at high altitude.

Egypt has played down the possibility of a bomb attack and stressed the need to wait for the results of an international investigation, keen to preserve the country’s economically vital tourism sector.

British Foreign Secretary Philip Hammond said an estimated 20,000 Britons currently in the Red Sea resort of Sharm el-Sheikh will be helped to leave.

“There is a significant possibility that the crash was caused by an explosive device on board the aircraft,” he said after an emergency cabinet meeting.

Cameron’s office said he and Sisi had agreed on the need for tight security at Sharm el-Sheikh airport, and British aviation experts have been dispatched to the resort to assess security.

Russian airline Kogalymavia, which operated the plane, has ruled out a technical fault or human error, drawing fire from the head of Russia’s aviation authority for a “premature” assessment.

Experts say the fact that debris and bodies were strewn over a wide area indicated the aircraft disintegrated in mid-air, meaning the crash was likely caused by either a technical fault or a bomb on board.

A US military satellite picked up a heat flash at the time of the crash that could point to a catastrophic event during the flight, US media reported.

Russian President Vladimir Putin has described the crash as a “huge tragedy”, and the first victim was expected to be buried on Thursday.

Relatives of the victims have begun identifying the bodies after two planes delivered the remains of many to Saint Petersburg.

In the city centre, about 300 people attended a vigil for the dead on Wednesday.