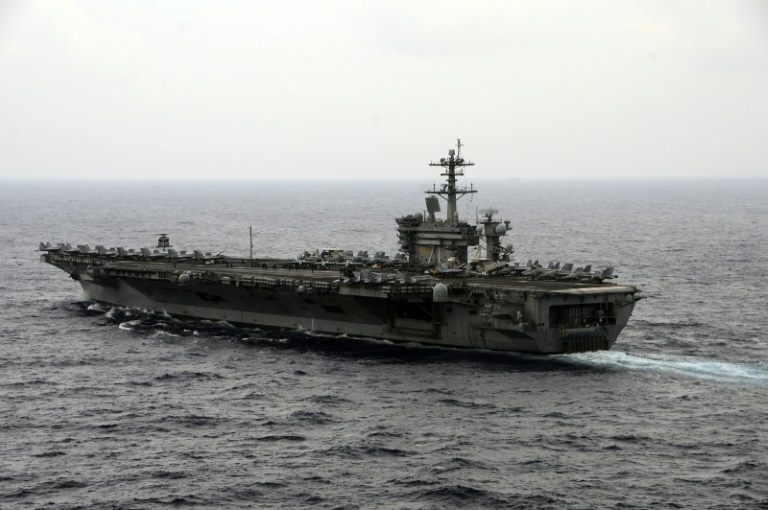 Defense Secretary Ashton Carter on Thursday visited a US aircraft carrier in the South China Sea, where he took a jab at Chinese actions that have been blamed for raising tension in the disputed waterway.

Carter flew to the USS Roosevelt — an enormous, nuclear-powered supercarrier — as it churned through international waters about 150-200 nautical miles south of where China is constructing artificial islands to underpin its expansive claims to the region.

“There’s a lot of concern about Chinese behaviour out here,” Carter said aboard the ship.

He described the vessel’s presence as “a sign of the critical role that United States military power plays in what is a very consequential region for the American future”.

Washington and Beijing are engaged in a big-power face-off over the Chinese island-building programme.

China’s expansion of tiny islets — some of which were previously mere reefs — has included runways, fuelling concerns of a future Chinese military presence far out into a sea that is a vital conduit for world trade.

The US has called for a halt to any island reclamation and said freedom of navigation must be preserved.

Carter arrived on the ship on an Osprey tilt-rotor aircraft and spent about three hours speaking to sailors on the floating military airport, which has a crew of about 5,500.

He harkened back to the aircraft carrier’s presidential namesake in stressing that the US was in the region to stay, and that China should become “part of the security system of Asia and not to stand apart from it”.

“Theodore Roosevelt’s motto was ‘speak softly but carry a big stick’ — speak softly means talk to other people, see what we can do to reach an agreement,” Carter said.

“This is a region that has enjoyed stability for a long time. It would be a shame if people ruined that, and I don’t expect that to occur.”

China’s claims to almost all of the South China Sea are widely disputed.

Malaysia, the Philippines, Vietnam, Brunei and Taiwan also have various claims, some overlapping, though none are as extensive as Beijing’s.

The body of water has long been viewed as a potential flashpoint, and the Chinese island-building has heightened those fears.

Carter’s visit came more than a week after Washington sent the guided missile destroyer USS Lassen to within several nautical miles of some of Beijing’s man-made islands in the Spratlys chain.

The move was intended to press Washington’s assertion that it has freedom of passage, but it angered China, which considers the area to be its territorial waters.

On Thursday, the USS Lassen pulled to within 500 metres (yards) of the USS Roosevelt’s starboard side, and its captain, Commander Robert Francis, was helicoptered over to speak to reporters.

He said the USS Lassen had sailed to within about six miles (10 kilometres) of islets in an area called Subi Reef — close enough to see “a bunch of cranes and ships and very low-lying land features.”

The USS Lassen was shadowed by a Chinese destroyer for about 10 days, and the two ships frequently exchanged “cordial” radio messages, he said.

“They did do their standard queries, to the nature of, ‘hey, you are in Chinese waters. What is your intention? We want to make sure there is no misunderstanding,'” Francis recalled.

The US ship’s response was that it was “operating within international law,” he added.

On Tuesday, Carter and China’s Defence Minister Chang Wanquan held a bilateral meeting on the sidelines of a regional defence dialogue in Kuala Lumpur.

Carter told Chang that the US would continue to “fly, sail and operate wherever international law allows,” including the South China Sea, according to US officials.

A day later, the regional dialogue ended on a sour note as the US and China butted heads over whether a final joint statement should mention the South China Sea. No statement was issued.