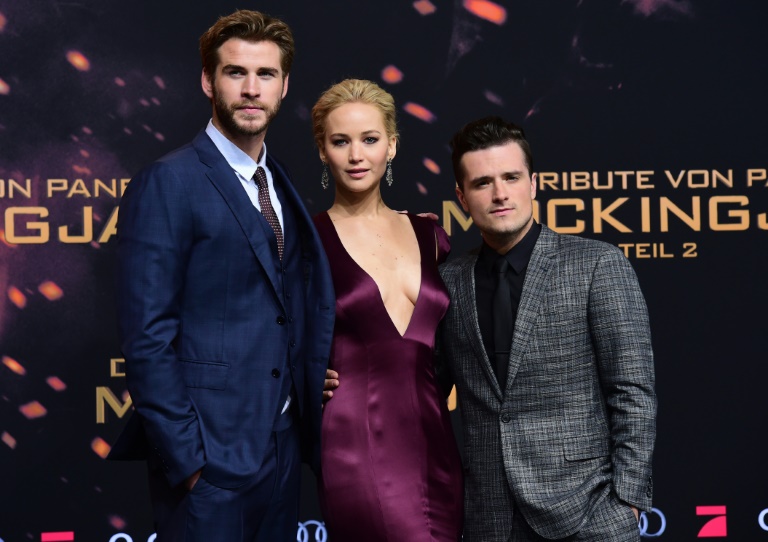 Thousands of shrieking teenage fans Wednesday greeted superstar Jennifer Lawrence as the final movie of “The Hunger Games” blockbuster franchise had its world premiere in Berlin, whose monumental architecture served as the backdrop for much of the dystopian fantasy.

Gazing at the 6,000 adoring fans crowding out the Sony Center venue, many of whom had camped out despite the autumn chill since the previous night, the 25-year-old Oscar winner said she had mixed feelings about having completed the four-movie action saga.

“It’s the perfect way to end these amazing four years, but it’s sad to not have this again,” said Lawrence, dressed — decidedly unlike her bow-and-arrow wielding warrior character Katniss Everdeen — in a purple evening dress, her blonde hair in a bun and wearing diamond earrings.

When asked whether she would hit Berlin’s famed techno clubs after the premiere, she replied that she’d prefer a hearty meal because she was “pretty hungry”, and quipped that “No, no, I don’t belong in a club, I’m an old lady, I’m too elderly.”

The red-carpet venue — decorated with fire bowls and echoing to the sound of drums — was packed with youngsters wielding smartphones and homemade banners of the rebel forces Katniss leads in “The Hunger Games: Mockingjay â€” Part 2”.

A day earlier, Lawrence, the world’s highest-paid actress, said she felt bitter-sweet to say goodbye to the feisty heroine, who leads a rebellion against dictatorship in the series, based on the best-selling teen novel trilogy by Suzanne Collins.

“She is kind, she is ruthless, she is independent-minded. She is strong but merciful,” said Lawrence at a press conference about the character who has battled her way through reality TV style life-and-death games.

“I wish that I could have a percentage of her courage and thoughtfulness. She inspires me in every way.”

While the books have sold 87 million copies worldwide, the four-part movie franchise has passed the billion-dollar mark at the box office, and Lawrence has topped Forbes magazine’s 2015 list of best-paid actresses at $52 million.

Hundreds of fans had camped out from as early as midnight, many wrapped in aluminium heat blankets, eagerly waiting to catch a glimpse of the stars ahead of the rare global premiere in the German capital, before the movie hits screens worldwide from November 18-20.

“I like that for a change a woman plays a strong heroine,” said Manuela Braun, 23, who had waited since the morning and up held a sign, adorned with heart stickers, that asked for “4 tickets please” for her and her friends.

Fans scrambled for autographs and selfies with Lawrence and other cast members, including Julianne Moore, Liam Hemsworth, Donald Sutherland and Josh Hutcherson, who walked through the venue on Berlin’s historic Potsdamer Platz.

“I think it’s great Jennifer Lawrence started at such a young age and yet stayed so level-headed, so funny and cool,” said Celeste Sopi, 18, waiting behind steel barricades.

Director Francis Lawrence said he felt inspired by Berlin, whose gigantic Nazi-era Tempelhof airport building, a crucial airhub during the Cold War, serves as the setting for an explosive battle of good versus evil in the movie.

The shuttered airport terminal, a towering semi-circular edifice of the country’s fascist past, today houses refugees who have escaped real-life war and oppression — a fact the director said he found “strange” indeed.

“The city has a unique monumentalism in its architecture,” said the director, who also shot in abandoned Soviet army barracks and a former power plant in the city.

“Some of the dark architecture you find in the city suits the movie perfectly,” he told the Berliner Morgenpost daily.

Sutherland — who plays the tyrannical President Snow ruling over a post-apocalyptic state — said he hoped the story of revolution will give young people in today’s turbulent world hope for “a decent future”.

“This is just the beginning,” said Sutherland at the press conference.

“The intent of this — for Suzanne Collins, for me, everyone actually who was involved in this project — is that it would be a catalyst for young people all over the world, everywhere. That they would see in it their doom, and the possibility for a decent future.”