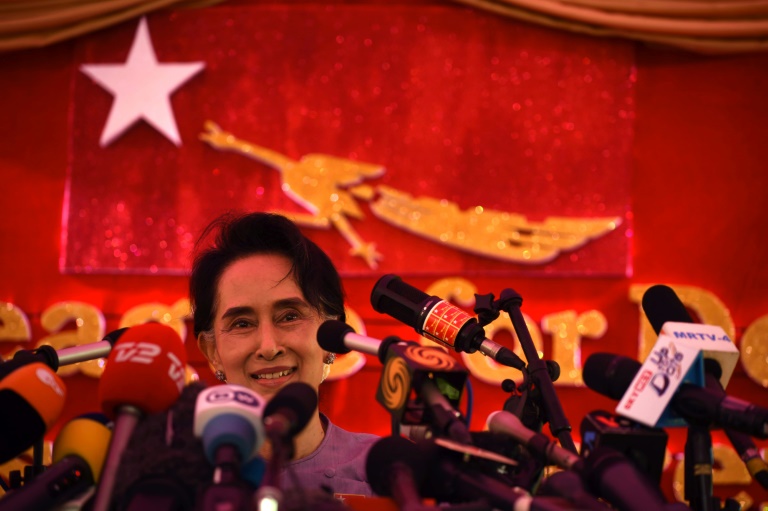 Myanmar’s democracy heroine Aung San Suu Kyi on Thursday vowed to run the government if her opposition party wins this Sunday’s landmark election, despite being barred from the presidency.

The former junta-ruled country goes to the polls on Sunday in elections which could see the army’s decades-long grip on power substantially loosened.

Suu Kyi has towered over Myanmar’s politics after a decades-long struggle for democracy and her party is expected to make major gains at Sunday’s polls if the vote is free and fair.

Yet under the military-scripted constitution, the 70-year-old is barred from running for the presidency by a clause believed to have been written specifically to thwart her bid for the country’s top office.

But in bullish remarks to international media ahead of Sunday’s vote she vowed to be “above the president” in the event of a victory by her National League for Democracy (NLD) party.

“I will run the government and we will have a president who will work in accordance with the policies of the NLD,” she told reporters gathered on the lawn of her Yangon home, the same mansion she was confined to during years of house arrest by the former generals.

Her path to the presidency is blocked by a charter clause outlawing those with foreign-born offspring taking the top post. Her two sons have British passports — their late father was a British academic.

Many hope Sunday’s election will be the country’s freest and fairest for a generation but concerns abound in a country with a long history of the army stifling democracy.

Polls in 1990 swept by the NLD were ignored by the military, while a 2010 election was boycotted by Suu Kyi’s opposition over fraud fears.

Reforms by the military since then have seen a quasi-civilian government take charge and guide sweeping changes leading to this weekend’s election.

But Suu Kyi struck a note of caution over the election, expressing reservations over the willingness of election officials to tackle allegations of irregularities so far.

Asked how vigilant she was to the possibility of fraud she said: “If it looks too suspicious then I think we will have to make a fuss about it.”

But she added it was important for her party to run a government of “national reconciliation” if the NLD wins.

The party’s main rival is the incumbent Union Solidarity and Development Party (USDP) which is led by former general Thein Sein and stacked with ex-military cadres.

The NLD need 67 percent of seats to win an outright majority and beat down the challenge of any coalition between the USDP and the army. The USDP need only take around a third of seats to link up with the military bloc in parliament.

Army lawmakers essentially have a veto over major policy, including any changes to the constitution.

Observers say Suu Kyi could seek her own alliance with a compromise candidate for the presidency, which will be decided after the election in a complex process that could take several weeks.

Myanmar’s reform drive has been rewarded with the roll back of many western sanctions.

The United States hinted late Wednesday that more sanctions could be eased if Sunday’s poll is judged to be free and fair — specifically those barring US trade with Myanmar business elites with close links to the army.

The Nobel Peace Prize winner urged a “healthy does of scepticism” from the international community towards the elections, but welcomed the possibility of more sanctions relief for the impoverished country.