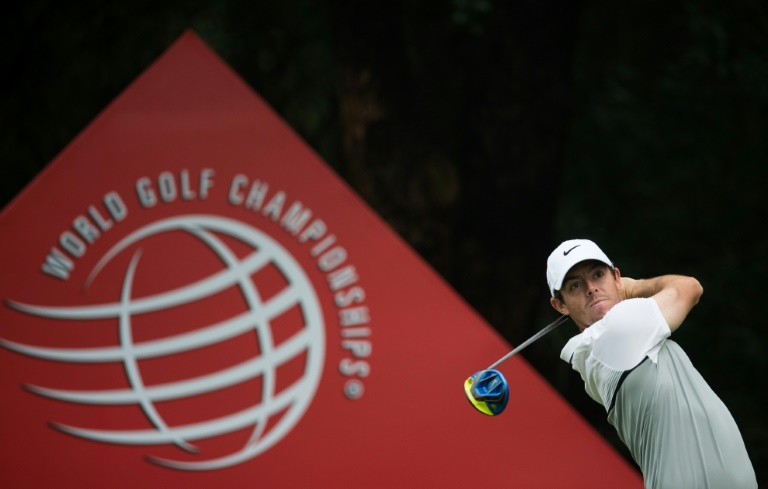 Former world number one Rory McIlroy shook off a bout of food poisoning to shoot a four-under par 68 in the first round of the World Golf Championships-HSBC Champions in Shanghai on Thursday.

McIlroy, who had been in bed for most of the past two days, said the illness had caused him to lose 10 pounds in weight (4.5kg), but he still managed to rattle in six birdies.

A double bogey at the tough par-four 15th was the only blemish on his card at Sheshan Golf Club.

“I’ve lost 10 pounds since being here. I can’t remember the last time I was this light,” McIlroy said after his round. “Looking forward to a good dinner tonight — hopefully it will stay inside my body.”

It left the Northern Irish four-time major champion five shots behind leader Branden Grace of South Africa who carded a 63 in windless, soft conditions that saw a raft of low-scoring as 59 of the 78-man field went under par.

“It’s probably a little better than I was expecting out there to be honest,” said McIlroy.

“But one of the hardest things was I had been in bed for basically two days, so whenever I got on to the (practice) range, I was stiff, really, really stiff.

“So I had to loosen up quite well. I still feel a little stiff actually.”

Masters and US Open champion Spieth was pleased to shake off some rust, having not played competitive golf since the Presidents Cup a month ago.

McIlroy, who missed a large part of the season after tearing ankle ligaments, holds a slim lead in the European Tour’s Race to Dubai standings with just three events to go.

But second-placed Danny Willett of England got off to a perfect start in his quest to chase down McIlroy by shooting one of the rounds of the day, a seven-under par 65 despite a bogey at his final hole, the ninth.

“I’m a bit disappointed with the finish,” said Willett. “But really pleased overall. Went out there, knuckled down and hit a lot of good shots.

“If you can be within touching distance going into the final event, Dubai could be pretty interesting.”

Three players are tied for second on eight-under par — Kevin Kisner of the US, Australia’s Steven Bowditch and Denmark’s Thorbjorn Olesen.

Kisner was especially pleased with his 64 because a recurrence of a back injury had meant he, like McIlroy, had kept the European Tour’s on-site doctor busy and had not managed to hit a shot in anger before today.

“I did it on Sunday in Malaysia last week,” Kisner said. “It was really bad the last three days, and then yesterday afternoon, I got some meds from the European Tour doctor, try to knock some of it out.

“I’ve had it in the past, just flares up randomly. Still wasn’t great today, but I can hit. That’s the first time I’ve hit was today.”

Dustin Johnson, the 2013 champion in this event, and fellow US Ryder Cup player Patrick Reed also shot seven-under rounds of 65.