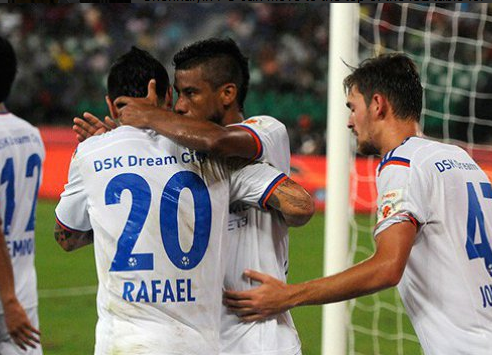 Leo Moura (64th minute) and Jonatan Lucca (74th minute) converted from the spot to give FC Goa the top spot in the league standing with 14 points, one more than FC Pune City.

Chennaiyin, on the other hand, suffered their fourth loss in eight matches to occupy the fifth place with 10 points.

Worse for Chennaiyin, Harmanjyot Khabra was sent off in the 89th minute, the second time he has been shown the red card in the league.

Chennaiyin Coach Marco Materazzi, who had declared at the pre-match press conference that he was not overly worried about having yielded seven penalty in seven matches in the first phase, was witness to his team conceding two more today, which resulted to their loss.

Chennaiyin had defeated Goa 4-0 in the away clash in Goa and it was not surprising to see the visitors opt for an extra man in defence. The five-man defence made it difficult for Chennaiyin to break them down, although Stiven Mendoza had good chances to open the account.

The best chance came to Mendoza in the 35th minute. Elano Blumer’s free kick missed all FC Goa defenders and fell nicely for Mendoza but the Colombian striker could not believe his luck when his right-footed attempt from close range went wide of the target.

Goa did not have too many clear looks at the rival goal in the first session but Brazilian striker Rafael Coelho, playing for the first time, showed promise. He twice managed to speed his way down the left flank but did not cross well enough and T Haokip came close in the 45th minute but Mehrajuddin Wadoo somehow managed to push the ball out for an abortive corner.