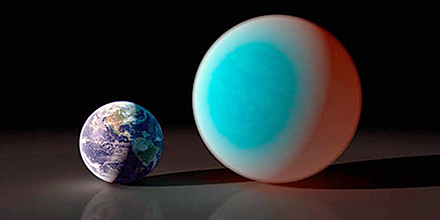 Washington DC: In a first, a team of scientists has simulated 3-D exotic clouds on an exoplanet.

Scientists have catalogued nearly 2,000 exoplanets around stars near and far. While most of these are giant and inhospitable, improved techniques and spacecraft have uncovered increasingly smaller worlds. The day may soon come when astrophysicists announce our planet’s twin around a distant star.

But size alone is insufficient to judge a globe. Though Earth and Venus are nearly identical in size, the latter’s surface is hot enough to melt lead. Astronomers must gather information about an exoplanet’s atmosphere, often through observing how the planet scatters or absorbs light from its parent star. But, that information is not always useful — as is the case with the exoplanet GJ1214b.

“When an exoplanet passes in front of its star, light can be absorbed at some wavelengths by molecules in the atmosphere, which we can analyze by looking at how light passes through the planet’s atmosphere,” said Benjamin Charnay from University of Washington. “But for this planet, when researchers previously looked with the Hubble Space Telescope, they saw almost no variation with wavelength of light.”

This “flat spectrum” for GJ1214b indicated that something in the planet’s upper atmosphere blocked light, keeping scientists in the dark regarding its atmosphere. Charnay decided to computationally model what its atmosphere could be, based on the planet’s temperature and composition. In the process, as he reports, he and his collaborators became the first to simulate three-dimensional exotic clouds in the atmosphere of another world.