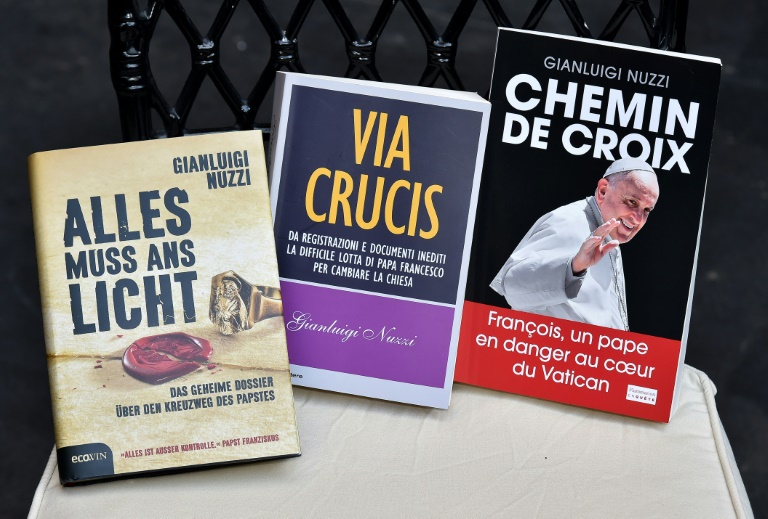 “May the Lord forgive us, but we don’t pay!”

Those were the dramatic words Pope Francis used to demand a clampdown on uncontrolled spending by the Vatican just months after his election in 2013.

Having discovered an “out of control” system, the Argentinian pontiff let rip over how the top tier of the Church was headed for financial meltdown because of a bloated payroll, unchecked spending and shady deals with over-charging contractors.

It was supposed to be a blast only for the ears of a handful of cardinals and other officials appointed to a special commission, COSEA, charged by the new pope with making proposals for reform of the Vatican’s economic and administrative structures.

But someone in the room was secretly recording.

Two years later, the transcripts are reproduced in a new book by one of Italy’s best-known investigative reporters.

And according to Gianluigi Nuzzi, author of “Merchants in the Temple”, Francis is still fighting a war of attrition with vested interests inside the Vatican — and it is far from clear if he is winning his battle to change the Church.

“So far Jorge Bergoglio’s efforts to remove the Merchants from the Temple have been insufficient,” Nuzzi writes in the final section of the book.

The conclusion is a reference to the biblical story of Jesus driving money-changers and other traders out of the Temple in Jerusalem to make the point that commercial activity should have no place in a sanctuary for worship.

But not before they had made some illuminating discoveries.

For every 10 euros donated by the faithful around the world under the centuries-old Peter’s Pence donation scheme, six were used to plug holes in the Vatican’s finances, Nuzzi said.

“Two went to a reserve account already in credit to the tune of 400 million euros and only two to the pope for the good works it is meant to finance.”

Another book published this week by Emiliano Fittipaldi makes a similar claim about the Peter’s Pence scheme and says it raised 378 million euros in 2013.

One of the most intriguing episodes recounted by Nuzzi occurred in March 2014, when a safe being used by the COSEA commission was broken into.

A swath of documents was removed and replaced by decades-letters from suspected mafia banker Michele Sindona to senior members of the Vatican hierarchy. Sindona died after being poisoned in prison in 1986 shortly after threatening to make explosive revelations.

“My interpretation is that this (the break-in) was clearly designed as a message of intimidation,” Nuzzi said Wednesday.

COSEA was wound up shortly after that episode and “it is not surprising the reform process slowed,” Nuzzi said.

A Vatican spokesman on Wednesday dismissed the content of the two new books as “out of date and biased,” claiming that Francis’s reforms had already addressed many of the issues raised.

But with its verbatim reproduction of the pope’s private comments, Nuzzi’s new book has evoked painful memories of the 2012 “Vatileaks” scandal centred on documents fed to the media by then-pope Benedict XVI’s butler.

Nuzzi also played a central role in breaking that story, which contributed to Benedict’s shock decision to retire the following year.

Vatican authorities this weekend arrested an Italian PR expert and a Spanish priest on suspicion of stealing and leaking classified documents to the media.

Church officials have not explicitly accused either Francesca Chaouqui or Lucio Angel Vallejo Balda of being behind the papal wiretap but have appeared to link the pair to the content of Nuzzi and Fittipaldi’s books.

Chaouqui claimed in an interview on Wednesday that it was the priest who had made the illicit recording. She is thought to be cooperating with the Vatican investigation and has been released from detention, while Vallejo Balda remains in prison.

Francis’s allies insisted that the leaks scandal would not affect his determination to push on with his reform agenda.

But Italian archbishop Nunzio Galantino acknowledged the pope must be feeling betrayed.

“I put myself in his shoes. No child of the Church, faced with such attacks, could remain indifferent,” Galantino said. “Some people are clearly afraid of the renewal process the pope is carrying out.”