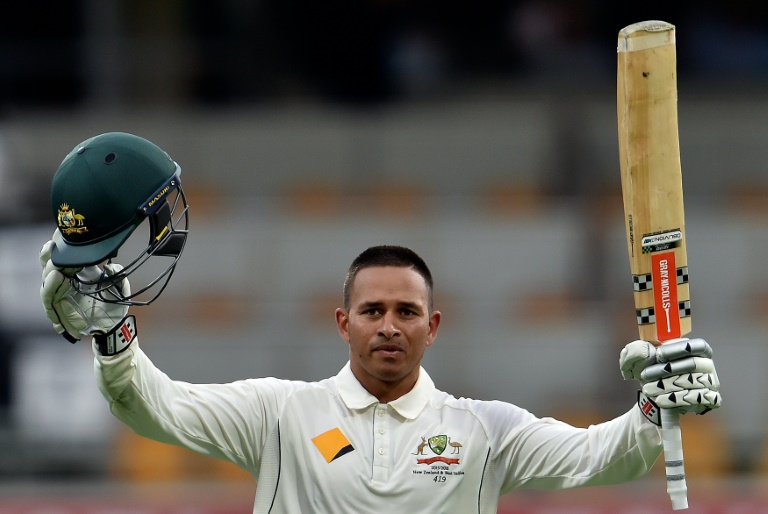 Australia’s Usman Khawaja is pinching himself after he finally broke through for an emotional first Test century — an achievement he craved so much he once dreamed of it and woke up feeling unhappy.

Pakistan-born Khawaja, 28, who came to Australia as a young child from Pakistan, put the gloss on a day of domination with an unbeaten 102 in an imposing first-day total of 389 for two in the first Test against New Zealand.

Dashing opener David Warner set the platform with his second-highest Test score of 163, but it was the stylish Khawaja who added the icing with his maiden Test hundred off just 123 balls to put the home side in a powerful position.

Khawaja was recalled to the Australian team after several high-profile retirements including skipper Michael Clarke and Shane Watson after a stop-start career in his nine previous Tests back to his 2011 debut.

But any doubts about Khawaja’s place in the Australian team were put to rest with his elegant knock including 10 fours and two sixes to justify his place at number three.

It was an emotional Khawaja who ran away from the pitch to raise his bat into the air in triumph and was hugged by his batting partner and captain Steve Smith nearing stumps.

“It was just elation, the biggest amount of emotional relief. I’ve wanted to get a Test hundred for Australia my whole life,” Khawaja said.

“There were times over the last three or four years (I thought) it might not happen, but when it did happen the build up of a lot of emotions came out because it’s what I always dreamt about.

“I physically actually dreamt about it once then I woke up and it was a horrible day. I’m glad it came into fruition, hopefully I don’t wake up in the next five minutes.”

Vice-captain Warner, whose 13th Test century laid the foundations for Australia’s record first-day total at the Gabba, paid tribute to a player he has known since childhood.

“I couldn’t be any more prouder, as a childhood friend growing up with him I know how much it means to him,” Warner said.

“But it means a lot to his family. Credit to them as well.

“He’s had a bit of adversity there with his knee (injury) and coming back, really working hard to get back into this team.

“Now I think it shows he’s cemented his spot there and credit to him the way he played.”

The runs flowed easily for Khawaja at his adopted Gabba ground after leaving New South Wales to play with Queensland in 2012.

“I just kept looking to score runs. It makes it easier when you have Davey (Warner) at the other end, it takes a bit of pressure off, you don’t feel like you have to score very fast,” he said.

“Fortunately, I got a few in my area and I got off to a flyer and kept the momentum going.

“I had my plan out there, I’ve played a lot at the Gabba before, it’s like a second home to me now.

“The first one is always the hardest, so it’s massive for me. I scored my first first-class century here and now my first Test century.”