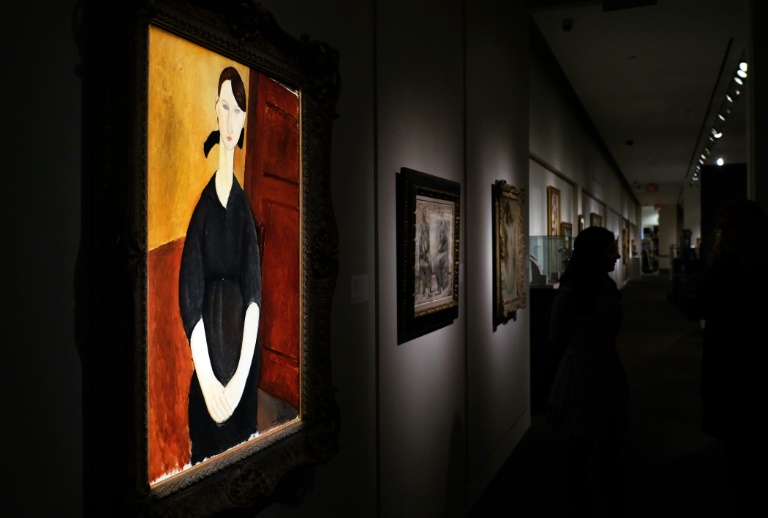 An Asian collector splurged nearly $43 million on an Amadeo Modigliani painting in New York, scooping the top prize in an otherwise lackluster evening sale at Sotheby’s that kicked off the autumn auction season.

The auction house sold $377 worth of art amassed by self-made American billionaire Alfred Taubman, a former Sotheby’s chairman who did jail time for price fixing in 2002.

The two and a half hour auction saw strong bidding from America and Europe as well, but Asia’s acquisition of the Modigliani portrait underscores increasing purchasing power in the region.

“Paulette Jourdain” depicts the maid and later lover of his art dealer, Leopold Zborowski. It came to the auction block for the first time and attracted bidding from five buyers, Sotheby’s said.

Sotheby’s identified the buyer as a private Asian collector.

Two other top lots did not sell after failing to attract minimum bids — “Femme Nue” by Edgar Degas and “Disappearance I” by American painter Jasper Johns, which were both valued at $15-20 million.

Simon Shaw, co-head of Sotheby’s impressionist and modern art, said he was “surprised” the Degas had not sold and expected there would now be a lot of competition to snap it up.

“That was one of the real jewels of this collection. No question that’s the best Degas pastel that has been on the market in quite a significant time,” he told reporters.

European collectors snapped up at least five of the top 10 bids and three went to private American collectors, the auction house said.

“There’s a lot of liquidity out there but people really want the right things. And they’re quite careful about how they spend their money, so it’s quite an efficient marketplace I’d say,” Shaw said.

Among those in attendance were Italian fashion designer Valentino and Taubman’s family.

Born to Polish immigrants, Taubman made a fortune by developing and building shopping malls. He was a prominent philanthropist, as well as businessman, who built up a staggering art collection.

Sotheby’s had valued the Taubman collection at $375 million to $527 million, before the sale. Other items are being auctioned on Thursday.

Taubman was convicted in a New York federal court of colluding with a counterpart at Christie’s in a conspiracy that US prosecutors said cheated customers out of $100 million.

Taubman, who insisted on his innocence, died in April aged 91.

Christie’s and Sotheby’s go head to head in a week of auction sales six months after the spring season smashed a string of records and netted more than $2.6 billion for the rival auction houses.

Fueled by rising demand from Asia and the Gulf, the spring season saw a new record for a work of art sold at auction — $179.4 million for Picasso’s “The Women of Algiers (Version 0).”

The most expensive lots this season are a sumptuous nude by Modigliani valued at $100 million, and a pop art masterpiece from Roy Lichtenstein estimated at $80 million, both to go under the hammer at Christie’s.