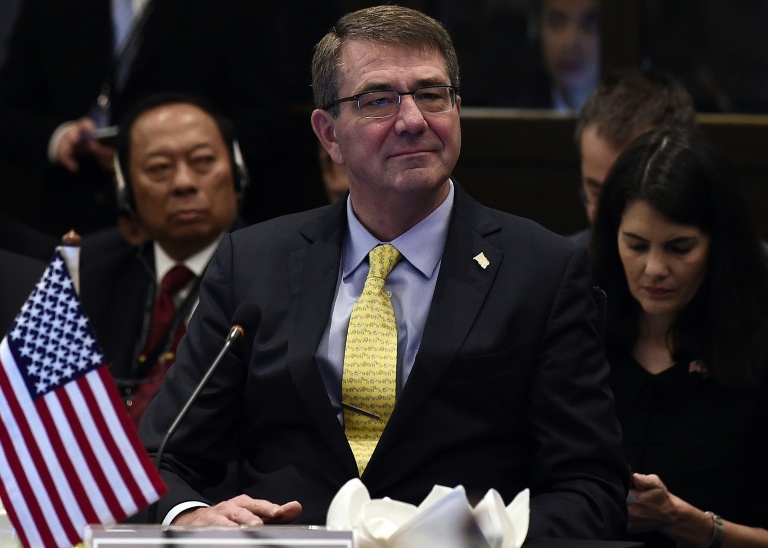 US-Chinese tensions over the South China Sea have forced a meeting of Asia-Pacific defence ministers to scrap plans for a joint statement after Beijing opposed mention of the hot-button issue, diplomats said Wednesday.

The impasse at the Kuala Lumpur defence dialogue marks the latest fallout from a confrontation between Washington and Beijing over China’s expansive claims to the strategic South China Sea and its construction of artificial islets to back them up.

“Our understanding is there will be no joint declaration,” a US defence official said, speaking on condition of anonymity.

It was not immediately clear how the decision not to issue a statement was made, but the US official said that “in our view, no statement is better than one that avoids the important issue of China’s (land) reclamation and militarisation in the South China Sea”.

Defence ministers from the 10-country Association of Southeast Asian Nations (ASEAN) and regional partners including the United States, China and Russia met Wednesday morning in Kuala Lumpur for an annual dialogue first launched in 2013.

Officials said this was the first time the dialogue would fail to issue a joint statement by the defence chiefs.

The China-US friction has spiked since last week, when the guided missile destroyer USS Lassen sailed within 12 nautical miles of at least one of the China-built land formations in the disputed Spratly Islands.

The US insists it has freedom of navigation in the area but the USS Lassen’s visit angered China, which called it a threat to Chinese sovereignty.

Beijing rejects any challenges to its disputed claims and the island-building campaign as outside interference.

Some of the Chinese island construction includes runways, and analysts say sights that were previously merely reefs will be able to house military personnel and hardware.

The US defence official said several ASEAN countriesâ€Ž also “felt that (it) was inappropriate” to exclude mention of the South China Sea issue from an official statement.

“It reflects the divide China’s reclamation and militarisation in the South China Sea has caused in the region,” the official said.

An ASEAN official confirmed to AFP that there would be no joint declaration, but that Malaysia would issue a chairman’s statement that is likely to touch on the maritime issues.

Carter told Chang in a meeting late Tuesday that the United States would continue to sail its vessels in waters that China claims.

During that bilateral talk, Chang described a “bottom line” below which it would defend the islands.

But the US delegation said this did not appear to be something that would deter the US from sailing in the contested region in the future.

Beijing insists it has sovereign rights to nearly all of the South China Sea, a strategic waterway through which about a third of all the world’s traded oil passes.

Its seabed is also believed to hold rich energy and mineral deposits.

China and its allies in the bloc have in the past opposed statements directly criticising Beijing over its actions.

But ASEAN declarations have increasingly made clear the grouping’s displeasure as regional concern grows over China’s intentions.