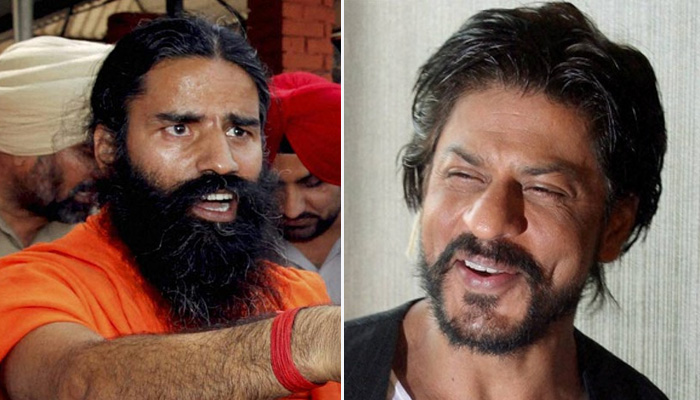 The hate storm against Shah Rukh Khan continues to escalate as Yoga Guru Baba Ramdev on Wednesday asked the former to return the money earned after receiving the prestigious Padma Shri award to the Prime Minister’s relief fund.

“If he (Shah Rukh Khan) is a true patriot, he should return all the money he earned after winning the Padma Shri to the Prime Ministers’ relief fund, in case he plans to return the award.”

Baba Ramdev’s remark comes hours after Bharatiya Janata Party (BJP) leader Kailash Vijayvargiya had on Tuesday attacked Shah Rukh Khan over his “extreme intolerance” comment, saying his ‘soul’ is in Pakistan though he lives in India and also painted him as an ‘anti-nationalist’.
However, the Senior BJP leader retracted his tweets on Shah Rukh Khan, saying he was ‘misconstrued by some’.

“My tweet was misconstrued by some. I didn’t mean to hurt anyone. I retract my yesterday’s tweets,” Vijayvargiya had said in a tweet on Wednesday.
BJP MP Yogi Adityanath compared Shah Rukh Khan to 26/11 Mumbai terror attack mastermind Hafiz Saeed and said the actor was speaking in the same language of terror.

“All such people should go to Pakistan where they will be shown their true position in the scheme of things. Hafiz Saeed and Shah Rukh Khan speak the same language,” Adityanath said.

Kailash Vijayvargiya and Vishwa Hindu Parishad (VHP) leader Sadhvi Prachi had earlier lashed out at Khan, accusing him of being a ‘Pakistani’ and expressing ‘ anti-national’ thoughts.

King Khan had joined the debate swirling around ‘intolerance’ on his 50th birthday, when he told a leading news channel that there was ‘nothing worse than religious intolerance and that it would take India to the Dark Ages’.

“Our religion cannot be defined or showed respect to by our meat-eating habits. How banal and silly is that,” he said, supporting the views of writers, filmmakers and others who have returned their awards in protest against the rising intolerance.