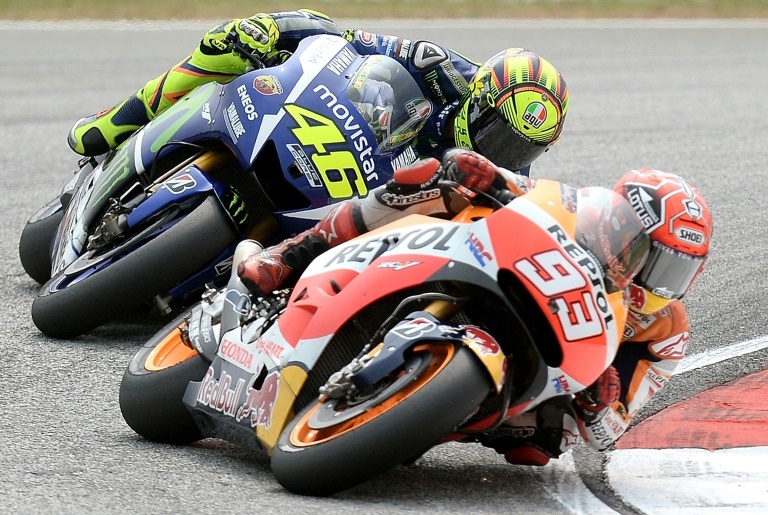 Jorge Lorenzo’s attempt to influence Valentino Rossi’s ‘Marquez-kick’ appeal was blocked on Tuesday as Yamaha hit out at Honda’s take on the crash in Sepang.

The Court of Arbitration for Sport (CAS) ruled that Lorenzo’s lawyers would not be permitted to take part in the crunch appeal with a verdict due “no later” than 48 hours before Sunday’s season-decider in Valencia.

“On 2 November 2015, lawyers acting for Jorge Lorenzo filed a Request for Intervention in order to be able to participate on his behalf in the CAS arbitration between Valentino Rossi and the FIM.

“This afternoon, the CAS informed the parties that Mr Lorenzo’s request was denied.

“Accordingly the CAS arbitration will continue between Valentino Rossi and the FIM (MotoGP’s governing body) only,” CAS announced.

The outcome of the appeal could determine the destination of the 2015 MotoGP title.

Rossi, who leads his Yamaha teammate Lorenzo by seven points, will start from the back of the grid on Sunday as punishment for kicking Honda’s Marquez off his bike in Malaysia — unless he succeeds in overturning the sanction.

Earlier on Tuesday, Yamaha hit back at claims made by Honda that technical data proved Rossi had kicked their world champion off his bike.

“(Honda’s) press releases included words that accuse Valentino Rossi of kicking Marc Marquez’s bike… that is something not proven by the investigation of the Race Direction,” Yamaha said.

Yamaha said the best way to draw a line under the “unfortunate affair” was to try to win what they hope will be a “memorable final race” in Valencia.

Marquez meanwhile hopes his on and off track spat with Rossi won’t spoil Sunday’s race after a build-up in which the Spaniard had an altercation with two Italian journalists at his Catalan home.

“It’s been a difficult week after what happened in Sepang, but I’ve tried my best to put it behind me and concentrate on my training and looking forward to the final race of the season,” the Honda rider said.

“We want to finish on a high note so we will work hard from Friday to get the bike set up well and give ourselves the best chance for the race.

“I’ve had mixed results here in the past but I enjoy racing here in front of the home fans. I hope the events of the past week can be put behind us and we can focus on the race.”

The 36-year-old Rossi, a nine-time world champion, lines up in Valencia on 312 points, with Lorenzo on 305. Marquez is third on 222 and out of contention for the world title.

The Italian motorcycling legend’s actions have sparked outrage in the Spanish media.

But Rossi denies kicking defending champion Marquez, claiming instead that he is the victim of a Spanish plot.

He accuses Marquez of pursuing a “dirty game” with the express intention of helping compatriot Lorenzo to the title, claiming Marquez conspired to help Lorenzo win points in Australia.