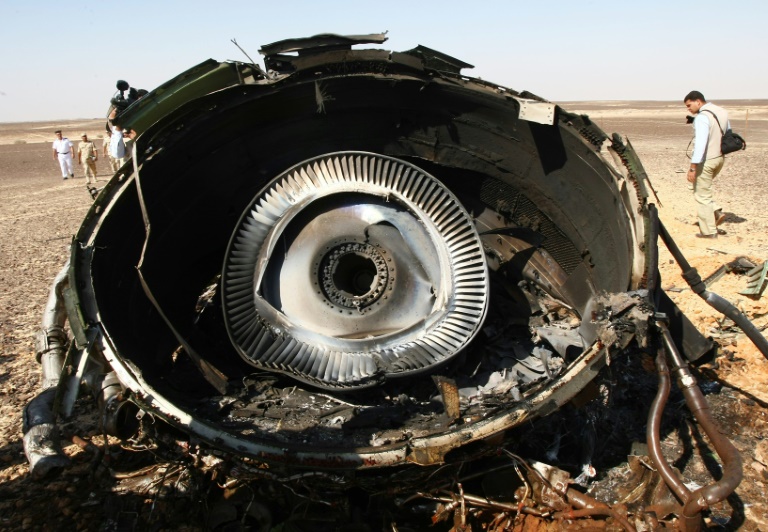 A bombing claimed by the Islamic State group Wednesday killed at least four policemen in Egypt’s Sinai, as investigators pursued their probe of a mysterious Russian airliner crash in the peninsula.

The jihadist group had also said it was behind Saturday’s downing of the Airbus A321, which crashed shortly after taking off from a south Sinai resort, but there has been no evidence yet to support the claim and experts say a mechanical failure may have been the cause.

All 224 people on board the flight bound for Saint Petersburg, mainly Russian tourists, were killed.

Investigators continued on Wednesday analysing data from the black boxes of the plane, a charter flight operated by Russian airline Kogalymavia, which went down 23 minutes after take off from Sharm el-Sheikh.

Authorities have warned that the probe could last several weeks or months, depending on the conditions of the recordings in the black boxes.

IS provided no details in its claim of responsibility for the crash. It has met with scepticism from Russia and Egypt, but officials say they cannot rule out any possibilities.

In another statement on Wednesday, IS insisted it had brought down the plane, challenging sceptics to prove otherwise.

“We are under no obligation to explain how it came down,” the group said in the audio statement posted on social media sites.

Cameron and Sisi “agreed it was important not to pre-judge the investigation,” the British statement said.

They “noted that there was still uncertainty about the cause of the crash and agreed it would be prudent to ensure the tightest possible security arrangements at Sharm el-Sheikh airport as a precautionary measure.”

The IS affiliate in Egypt is conducting a bloody insurgency in the north of the Sinai Peninsula that has left hundreds of policemen and soldiers dead.

On Wednesday it claimed responsibility for a suicide car bomb attack on a police social club in the town of El-Arish. The official MENA news agency said four policemen were killed in the attack.

Sisi, who departed for London on Wednesday, has downplayed the IS claim of responsibility for the plane crash as “propaganda” but said a full investigation will take time.

US Director of National Intelligence James Clapper also said this week it was “unlikely” IS was involved, but he did not rule out the possibility.

The airline itself has ruled out technical fault or human error, drawing fire from the head of Russia’s aviation authority. Alexander Neradko said the airline’s conclusions were “premature and not based on any real facts”.

Experts say the fact that debris and bodies were strewn over a wide area points to a mid-air disintegration of the aircraft.

That leaves two possibilities — a technical fault that caused the plane to disintegrate or an explosion caused by a bomb smuggled on board, according to experts.

US officials told CNN and other US television networks that a military satellite had detected a heat flash at the time of the crash, which could point to a catastrophic event during flight, possibly a bomb explosion.

Search operations had been extended to a radius of about 40 kilometres (25 miles).

Relatives of the victims have begun the process of identifying the bodies after two planes delivered the remains of many to Saint Petersburg.

Family members provided DNA samples at a crisis centre set up near Saint Petersburg’s Pulkovo airport, now the site of an impromptu memorial where people have brought flowers and toys to commemorate the victims, many of them children.

IS has deployed shoulder-fired anti-aircraft missiles in the past but they are not known to possess weapons that could bring down an airliner flying at high altitude.

The militants have killed hundreds of policemen and soldiers since the military overthrew Islamist president Mohamed Morsi in 2013.

They say their attacks have been in retaliation for an ensuing police crackdown in which hundreds of Morsi supporters have been killed and thousands, including the ousted president, jailed.

In an interview with the BBC ahead of his trip to Britain, Sisi insisted the Sinai “is under our full control”.