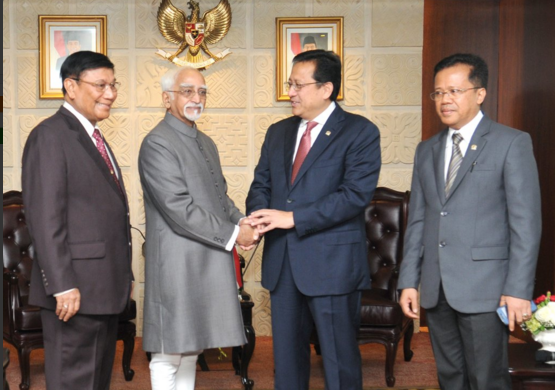 Vice President Mohammad Hamid Ansari and his entourage are among travelers stranded at Bali’s Ngurah Rai International Airport after volcanic eruptions in nearby Lombok forced the closure of the airport. Though 700 flights have been cancelled, first flight to take off from Bali will be Air India One. The airport is likely to reopen at 7 am on Thursday morning. Chhota Rajan is likely to be sent back to India on an Air India code share flight.

Earlier, Jakarta Interpol had confirmed that Chhota Rajan, who was arrested in Bali, would be deported to India on Wednesday morning. Rajan’s flight was scheduled to leave Bali airport at 11 pm (Bali local time) on Tuesday.

Rajan was all set to be deported to India after the last leg of Rajan’s deportation was completed in Indonesia on Tuesday. The Denspar Immigration Chief along with the Jakarta Interpol had questioned him at the Bali Police Headquarters.

In an explosive revelation on Tuesday morning, Rajan had alleged that some officials in the Mumbai Police are working with India’s most wanted terrorist Dawood Ibrahim.

“Mumbai Police has committed a lot of atrocities on me and I don’t trust them. There are some in the Mumbai Police who are working with Dawood. The Delhi Government should do justice with me keeping that in mind. I am not scared of Dawood and I will continue fighting against him and terrorism,” Rajan had told the media.

A special joint team of CBI officials, Mumbai and Delhi police was sent to Indonesia on Monday to seek deportation of Chhota Rajan, the underworld don who was arrested on October 25. Rajan was given consular access on Sunday.