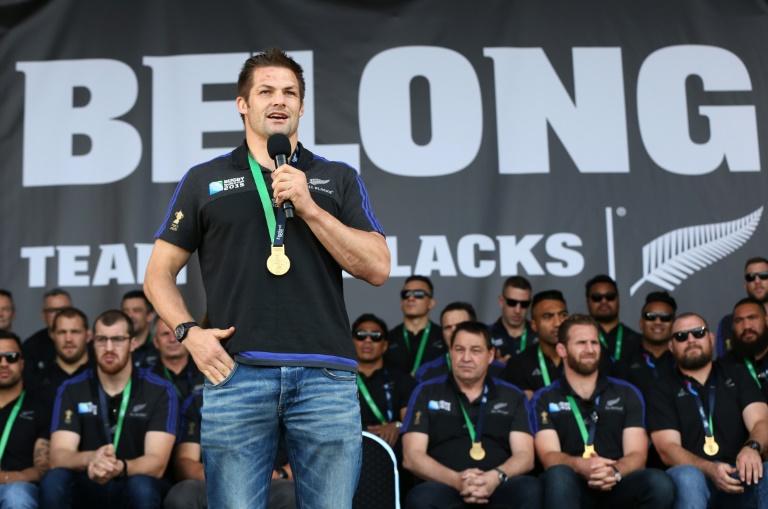 The All Blacks returned home to a frenzy of hakas and hysteria on Wednesday, with even the players stunned as 50,000 fans packed central Auckland to celebrate their Rugby World Cup victory.

“It’s huge to come back and see all this support and everyone turning out, it’s just overwhelming,” the tournament’s breakout star Nehe Milner-Skudder said as the crowd at the city’s Victoria Park roared approval.

The All Blacks arrived from London early Wednesday morning and celebrations began even before they stepped off the plane, with dozens of airport workers performing a haka on the tarmac to welcome them.

Centre Sonny Bill Williams admitted it was an emotional moment.

“It’s awesome, it shows what rugby means to the New Zealand people,” he said.

Inside the airport, about 4,000 black-clad supporters, some of whom had camped out overnight for a glimpse of their heroes, packed the arrivals hall.

“The support’s been amazing, so to bring this back is pretty awesome,” McCaw said.

“It’s not too bad is it?” chimed in coach Steve Hansen, gesturing towards the trophy. “We’re getting pretty used to having it around too.”

New Zealand’s comprehensive 34-17 victory over Australia in the final at Twickenham on Saturday was the first time a team has ever won back-to-back World Cups.

It also gave the All Blacks a record three titles and was the first time the New Zealanders have won the trophy away from home.

Star fly-half Dan Carter, who has confirmed his international retirement and will head to France, was thrilled at the passion displayed by fellow Kiwis.

“It’s such a special feeling,” Carter told reporters. “We’re all proud New Zealanders and it’s amazing to see the support that we’ve got.

“We’d read about it and spoken to family and friends back home, but to see it first hand… it’s great.”

There were more hakas and a formal Maori welcome at Victoria Park, where McCaw received the loudest cheer and was given the freedom of the city by Auckland’s mayor Len Brown.

But it was a day for the fans and the All Blacks, displaying the same relaxed off-field attitude they adopted during the tournament, mingled with the crowd, signing autographs and posing for selfies with star-struck fans.

There will be similar parades in Christchurch and Wellington on Thursday and Friday.

McCaw said the team were exhausted after their campaign but still wanted to share their moment of glory with supporters.

“Glad to be home, it’ll be nice to be in your own bed, we’ve been in 12 different hotels since we left,” he said.

“But we’re going to enjoy the next few days going around the country and saying thanks… seeing you all here has made it all worthwhile.”

Prime Minister John Key said the mood in New Zealand was “euphoric” and fans were eager to show the All Blacks how proud they were of the team, which has been hailed by pundits as the greatest to ever play the game.

He said even Britain’s Prince Charles and wife Camilla, who arrive in New Zealand later Wednesday for an official visit, were keen to congratulate McCaw’s men, schedules permitting.

“There’s no question they’d like to meet up with them, they obviously can see what a big deal it is for New Zealand and how celebrated they will be,” Key told TV3.