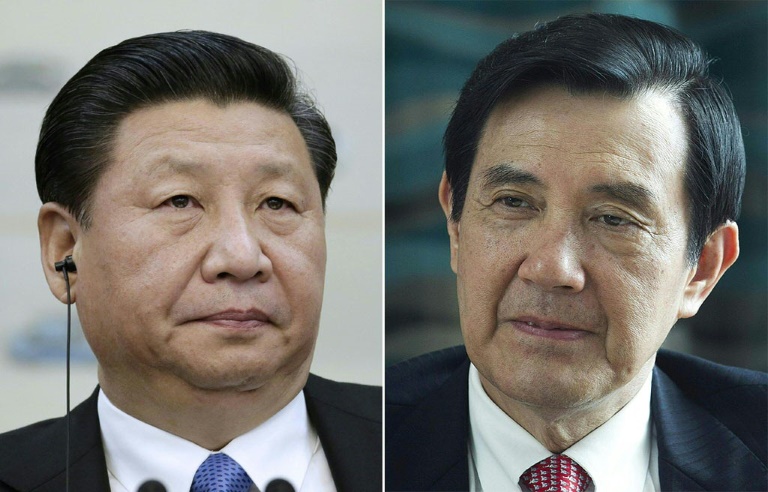 The presidents of China and Taiwan will meet this weekend in Singapore with a handshake that will mark a seismic shift in a relationship frozen in enmity since 1949.

When Taiwan’s leader Ma Ying-jeou meets his Chinese counterpart Xi Jinping it will be an unprecedented official stamp on a seven-year rapprochement that has seen the launch of direct flights, trade deals and a tourism boom as the two sides have forged previously unthinkable ties.

Their split at the end of a civil war on the mainland in 1949 was the start of decades of hostility as self-ruled Taiwan forged its own identity and developed into a democracy, while Beijing insisted it was still part of its territory to be reunited by force if necessary.

The island became a cold war outpost with the United States its major ally, committed to defending Taiwan against any Chinese aggression.

But when Ma came to power in 2008 promising better relations would lead to prosperity, ties swiftly warmed with high-level talks resumed for the first time in over 10 years.

Political sensitivities have meant the burgeoning relationship has not been overtly played out — the first government-to-government meetings only took place last year.

Now it will be formally sealed at the highest level.

China hailed the talks as a milestone in a dispatch on the state Xinhua news agency that said the two sides would “exchange views on promoting the peaceful development of cross-Strait relations”, referring to the stretch of water that separates them.

“For the past seven years… the two sides have built up mutual trust and opened up a path of peaceful development,” it cited Zhang Zhijun, head of the mainland’s Taiwan affairs office, as saying.

There were few other details on the substance of the summit. Ma’s spokesman said that the goal is to “secure cross-Strait peace,” but that there would be no agreement signed nor any joint statement issued.

To avoid the risk of a protocol problem over the title “president”, Xinhua cited Zhang as saying that the two leaders will call each other “Mister”.

“This meeting will be crucial,” said political analyst Alexander Huang of Graduate Institute of International Affairs and Strategic Studies at Tamkang University.

“It will allow cross-strait ties to move into a new chapter.”

But some observers say both China and Ma’s ruling Kuomintang (KMT) risk a backlash at presidential elections in January.

Public support for the KMT has plummeted, with its China-friendly policy a major factor.

Opponents have accused Ma of selling out the island by attending the meeting with Xi.

Five young protesters were arrested Wednesday afternoon for throwing smoke devices and eggs near the presidential office in Taipei and political opponents gathered outside parliament earlier in the day.

“Any interaction between the two sides can only happen when it will benefit the country’s free and democratic development as well as regional stabilisation,” it said.

The US will also be watching closely — the White House gave a cautious welcome to any steps to reduce cross-strait tensions.

“On the one hand it likes this thaw and improvement of relations across the Strait,” said Jean-Pierre Cabestan, professor in political science and Hong Kong Baptist University.

“On the other hand, it thinks that Ma’s rapprochement policy went too far and has contributed to weaken Taiwan’s security.”

“Everyone wants to maintain cross-strait peace, so we are taking steps to reinforce that and deepen interactions between the two sides,” MAC chief Andrew Hsia told reporters Wednesday.

Ma’s hopes for a meeting with Xi have previously been dashed, but Hsia said the “timing is mature” now for the summit.

Ma will step down next year after a maximum two terms with dwindling approval ratings.

The KMT suffered its heaviest-ever local election defeat last year, with many voters feeling big business has benefited from China ties, rather than ordinary Taiwanese people.

The two sides are increasingly intertwined economically, with major Taiwanese companies like electronics giant Foxconn investing heavily in the mainland.

There are also concerns over lack of transparency — last year saw the unprecedented occupation of parliament by student protesters angered by a trade agreement they said had been made in secret.

Ma has repeatedly defended his China-friendly policies, saying they have brought stability to the region.