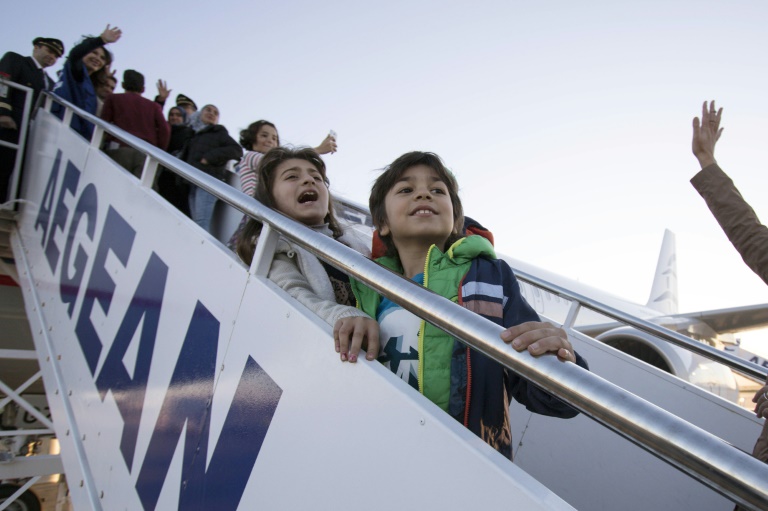 The first refugees left Greece on Wednesday under the second phase of a troubled European Union relocation plan as the number of people entering Europe illegally reached 800,000.

And Sweden — a top destination for many asylum-seekers — asked for EU help to relocate some of the migrants it has taken in as it struggles with record numbers of new arrivals.

Thirty refugees were given a VIP sendoff from Athens airport before flying to Luxembourg where they will begin a new life.

They are the first to be relocated from Greece under plans, fiercely contested by some states, to share out nearly 160,000 migrants whose arrival has left frontline states swamped.

At the airport, Greek Prime Minister Alexis Tsipras said the six Syrian and Iraqi families were making “a trip to hope.”

“It’s a drop in the ocean, but we hope the drop will become a stream and then a river of humanity.”

His remarks came after Fabrice Leggeri, head of the EU’s Frontex border agency said 800,000 people had entered the EU illegally this year, telling Germany’s Bild newspaper the influx had probably not “reached its peak”.

The need for a solution to Europe’s worst migration crisis since World War II is becoming increasingly urgent, with at least 80 people — many of them children — dying in the last week while trying to cross the sea from Turkey to Greece.

The relocation scheme was got under way in Italy on October 9 after a bitter debate that split the 28-nation bloc along east-west lines, dividing older EU members from former Soviet bloc nations.

In Stockholm, Sweden’s Prime Minister Stefan Lofven said he wanted EU help to relocate some of the refugees it had taken in.

“Sweden has taken a disproportionately large responsibility in comparison with other countries in the EU, and now we are extremely strained,” he said in a statement.

“It is time that other countries take responsibility and that is why the government requires redistribution of refugees from Sweden.”

Sweden, a country of 9.8 million, is expecting to receive up to 190,000 asylum seekers this year — putting it among the EU states with the highest proportion of refugees per capita.

The EU proposal would have seen 54,000 migrants and refugees relocated from Hungary, but Budapest rejected the scheme out of hand — and Sweden is reportedly keen to take advantage of the offer for some of its own refugees.

As the crisis bites, several European countries have closed their borders, with Austria becoming the latest country to propose tightening its asylum rules.

Lawmakers have tabled a bill proposing that anyone granted asylum would be reassessed after three years and sent back home if their country of origin was deemed safe.

And in France, a young French fishermen was among eight people arrested on suspicion of helping migrants cross the Channel to Britain aboard a high-speed inflatable boat.

The crisis has also put the spotlight on Turkey, the gateway for hundreds of thousands of refugees fleeing war-torn Syria and Iraq.

Tsipras on Wednesday said he would visit Turkey to discuss “more substantial cooperation” over the refugee crisis.

He also said Turkey should play a more active role in registering those on its soil.

The EU last month announced a refugee cooperation deal with Turkey including a possible three billion euros ($3.3 billion) in aid, but Ankara has since played down expectations.