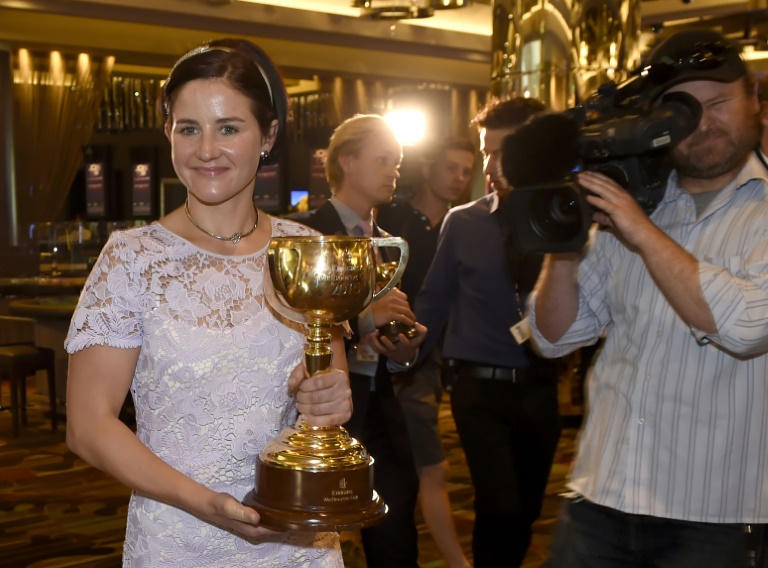 Champion jockey Michelle Payne Wednesday said she wanted to be a role model for women in sport, adding that being the first woman to triumph in Australia’s Melbourne Cup was proof that dreams can come true.

Payne rode 100-1 long-shot Prince of Penzance to an historic win at Flemington on Tuesday and said she was ready for the attention that came with winning the Aus$6.2 million ($4.4 million) race.

“I really want to be a great ambassador, not just for our industry, but for sports people, for women, for anybody who has a dream… you never give up,” the 30-year-old told reporters in Melbourne.

“And I hope that it helps people with dreams, young kids and not just females, anyone, that if you’ve got a dream, never give up, always have faith in yourself.”

After winning the race Tuesday, Payne spoke of racing as a “chauvinistic sport” while trainer Darren Weir revealed that while Prince of Penzance’s major owners John Richards and Sandy McGregor had backed her, others had not.

Payne, who has ridden Prince of Penzance in all but one of the six-year-old gelding’s 24 races, admitted to fighting hard to be given the chance to saddle up for the big race.

“It is fair to say I drove Darren mad about this horse because I obviously knew that some of the owners wanted to take me off,” Payne told The Australian newspaper.

“I just kept showing up and doing all of his gallops and just annoying the hell out of Darren in the hope they wouldn’t take me off. He said, ‘Just win on it and don’t give them the excuse’.”

Payne’s father Paddy, who raised his 10 children after their mother Mary died in a car crash when Michelle was a baby, spoke of his pride at his daughter’s win.

“I thought a girl would win the Melbourne Cup but I didn’t think it would be one of mine,” he told Melbourne’s 3AW radio.

But he also said it was almost time for his daughter to retire, telling the Australian Broadcasting Corporation: “She’s 30 years old, she’s been doing it for 15 years, I think it’s time for her to give it away.”

Retirement did not appear to be his daughter’s mind, with Payne due to race at the Aus$100,000 Kyneton Cup near Melbourne later Wednesday.

“I love working and I love my job. It’s the best job in the world even though it’s so dangerous,” Payne said.

“It’s not a job to me. It’s my passion and it’s what I love. I definitely don’t do it for the money. I wouldn’t have even thought twice about the money yesterday, but it is a bonus.”