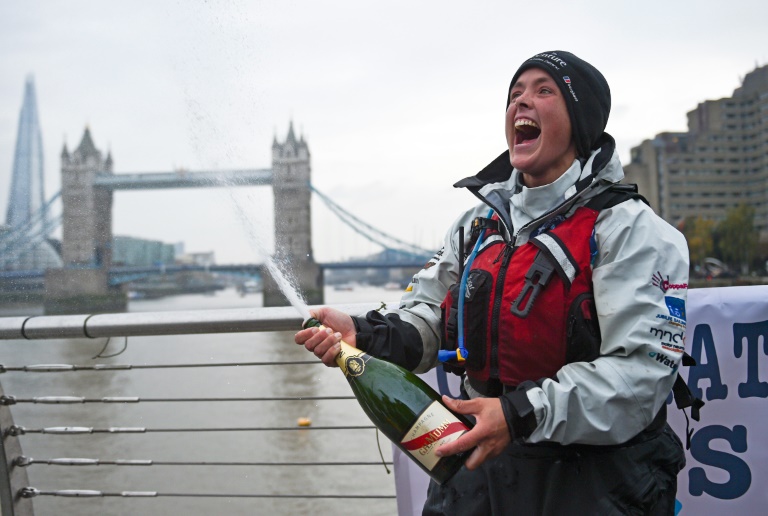 She’s a global traveler in the real sense of the term!

Having spent 1,677 days rowing the open seas and cycling across continents, British adventurer Sarah Outen received an emotional hero’s welcome as she completed her odyssey under London’s Tower Bridge on Tuesday.

After stepping onto land, she was embraced by her mother, brother and tearful fiancee Lucy, to whom she proposed from the middle of the Pacific Ocean.

“I really stink of the River Thames, so I think I need to take a shower.

“Then I’m really looking forward to catching up with family and friends,” she added.

“And I’m getting married! I forgot that!”

The 30-year-old fought off the tears as a gospel choir serenaded her with her “favourite song”, Elbow’s “One Day Like This”.

Outen set off from the same spot over four years ago, hoping to raise money for four charities by rowing, kayaking and cycling around the world.

But it was not all plain sailing, and she was rescued twice after being battered by Hurricane Joaquin in the Atlantic and by Tropical Storm Mawar when rowing in the Pacific from Japan to Alaska.

She told AFP the Pacific ordeal was “very frightening, being thrown about the sea, capsizing and not knowing if I was going to be OK,” and said she had suffered from post-traumatic stress.

She did finally complete the journey from Japan to Alaska, becoming the first woman to row solo across the North Pacific.

“There have been so many memorable and brilliant moments, be it meeting people at the roadside and going back to their house to share food with them to the amazing wildlife encounters I’ve had,” she said.

“I wish that everybody could experience the good things I’ve experienced. Being alone in the middle of the ocean appreciating the vastness of the planet in all dimensions. It’s very, very special.”

As-well as being accompanied by dolphins and whales on her journey, she was joined by a less welcome travel-mate in remote Alaska.

“I found myself naked in a stream, looking up to find this big brown bear padding up the river towards me as I wash my hair,” she recalled.

As she made her final approach on Tuesday, dozens of supporters cheered from Tower Bridge, draping flags from the famous landmark reading “boooosh!” and “London’s conquerer”.

The cheers got louder and the Union Jack-waving crowds denser as she neared the dock to disembark.

After spraying family, friends and media with Champagne, Outen was given a military guard before toasting her achievement with a party.

The adventurer is halfway to her goal of raising Â£100,000 ($154,000, 140,000 euros) for breast cancer charity Coppafeel!, the Jubilee Sailing Trust, Water Aid and the Motor Neurone Disease Association.