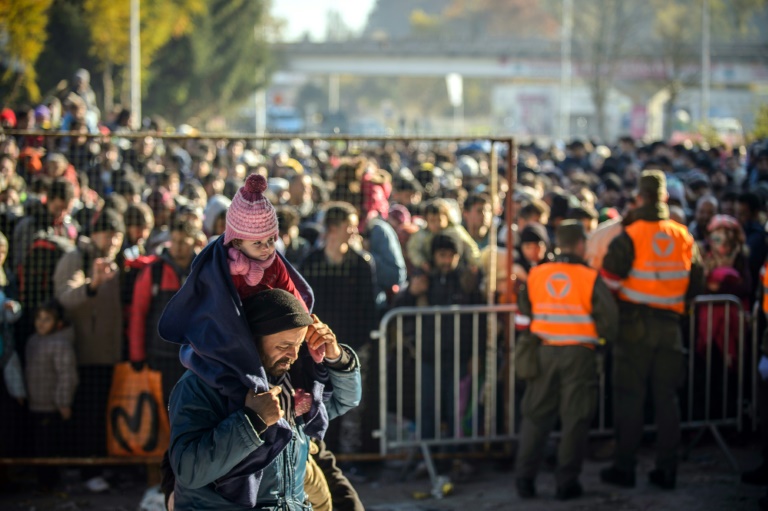 Austria sought to tighten asylum rules in the face of a record influx of migrants, hours before the first refugees are set to be relocated from Greece Wednesday under a faltering EU plan to ease the burden on southern countries.

Facing a record influx of migrants and a surge in support for the anti-immigration far-right, Austrian lawmakers have put forward a bill that would mean anyone granted asylum would be reassessed after three years and sent back if their country of origin is deemed safe.

Those under “subsidiary protection” — a kind of asylum-lite status awarded in particular to Afghans — will meanwhile only be allowed to be joined by family members after three years, one year more than currently.

Chancellor Werner Faymann said the controversial legislation, due to go before parliament in December, is a “signal that asylum is something which is temporary” and is aimed at deterring people from coming to Austria.

Rights groups sharply criticised the proposals, saying they would make the integration of migrants into Austrian society more difficult, and the UN refugee agency said tightening rules on relatives “could keep families apart for many years, if not for ever.”

Austria has seen some 400,000 migrants enter the country since September, making it one of the highest recipients of new arrivals in the European Union on a per-capita basis amid the largest movement of people in the region since World War II.

While most migrants are heading to Germany or Scandinavia, front line states on the bloc’s south and eastern borders have struggled to cope with the thousands of people streaming across their borders from land and sea.

In a bid to ease their burden, the EU on Wednesday will start relocating refugees from Greece to other member states in a ceremony that will be attended by the EU’s commissioner for immigration and European Parliament president Martin Schulz.

Greek Prime Minister Alexis Tsipras will meet a first group of 30 refugees at Athens airport before they voluntarily board a plane for Luxembourg, Athens said in a statement.

Laboriously devised and, in some quarters, fiercely contested, the EU plan calls for sharing out nearly 160,000 migrants among EU countries after they are processed at so-called “hotspots” in Italy and Greece.

They include 66,000 for whom Greece was the first port of call, among the hundreds of thousands that have travelled through the Mediterranean country — more than 200,000 migrants arrived in Greece in October alone, according to the UN refugee agency.

Many have died trying to make the dangerous journey to Europe by sea, and on Tuesday four people including two children drowned when their boat ran into trouble off the Greek island of Lesbos, Greek harbour police said.

The first asylum-seekers left Italy under the relocation plan on October 9, although some EU member states such as the Czech Republic, Hungary, Slovakia and Poland still oppose the mandatory quotas.

A group of conservative parties from across Europe met last month in Madrid and called for a strengthening of the union’s external borders.

Facing calls for drastic action to stem the stream of people heading for Germany, Chancellor Angela Merkel warned fighting could break out along the migrant route in the western Balkans if Germany closed its border with Austria.

Blocking the frontier with Austria could “lead to a backlash,” she told members of her party in remarks published Tuesday, adding: “I do not want military conflicts to become necessary there again.”

In Brussels, EU President Donald Tusk urged Turkey — which plays a linchpin role in the crisis as it hosts more than two million Syrians — to show its readiness to work with Brussels.

“I hope to receive a strong and visible signal from your side that Turkey is ready to engage with the EU on these issues in a constructive and forward-looking spirit,” Tusk said in a letter congratulating Prime Minister Ahmet Davutoglu after his party was re-elected on Sunday.

The EU last month announced a refugee cooperation deal with Turkey including a possible three billion euros ($3.3 billion) in aid.

But Erdogan and other officials have since dampened expectations, in a further sign of the troubled relationship between Ankara and Brussels hindering international cooperation over the migrant crisis.