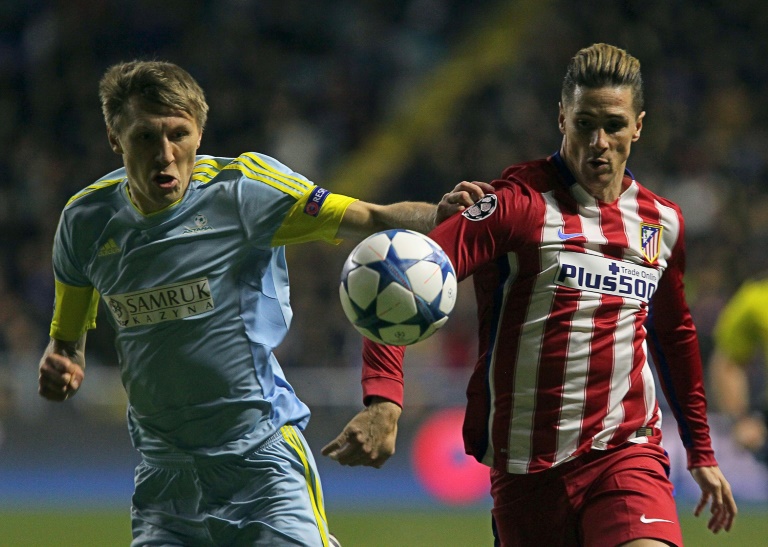 Kazakh champions Astana claimed just their second ever Champions League point in an uninspiring 0-0 draw against Atletico Madrid on Tuesday.

The hosts had been thrashed 4-0 in the Spanish capital two weeks ago, but held out bravely for a surprise point despite rarely threatening to seal their first ever Champions League win.

The draw sees Atletico move top of Group C on seven points from four games, but Benfica are only a point back and the Portuguese champions can move to the top of the group should they avoid defeat against Galatasaray later in the day.

“The game didn’t surprise me, I said it would be difficult and so it was,” Atletico coach Diego Simeone told beIN Sports.

“I’m not annoyed with my team. We were good at the back, but we lacked a bit going forward. Now we have to beat Galatasaray in order to stand a good chance of going through.”

Atletico were faced with freezing conditions on a plastic pitch after making the near 6,000 kilometre trip from Madrid and it was the hosts who had the first effort on goal when Jan Oblak saved from Dmitri Shomko.

The 2013/14 finalists took control of the game as the half developed and only some brave defending denied Tiago and Guilherme Siqueira as they had goalbound efforts blocked.

Fernando Torres’s long wait for his 100th Atletico goal continued as he wasted the best chance of the game when Evgeny Postnikov’s dallying allowed the former Liverpool and Chelsea striker to turn Juanfran’s cross towards goal but wide of the far post.

Koke also saw a free-kick clip the top of the crossbar as Atletico ended the half on top.

However, the visitors failed to carry on that momentum in the second period and it was only when Yannick Ferreira Carrasco was introduced from the bench in the final 20 minutes that they started to create chances to snatch all three points.

Antoine Griezmann was kept quiet throughout, but Atletico’s top scorer found a yard of space to flash a shot across goal before a Carrasco cross came back off the crossbar with Astana keeper Nenad Eric flapping.

Jose Maria Gimenez’s header forced the ‘keeper into a comfortable save moments later, but Eric produced his best stop of the game deep into stoppage time when he got down to save Carrasco’s effort with the last kick of the match.