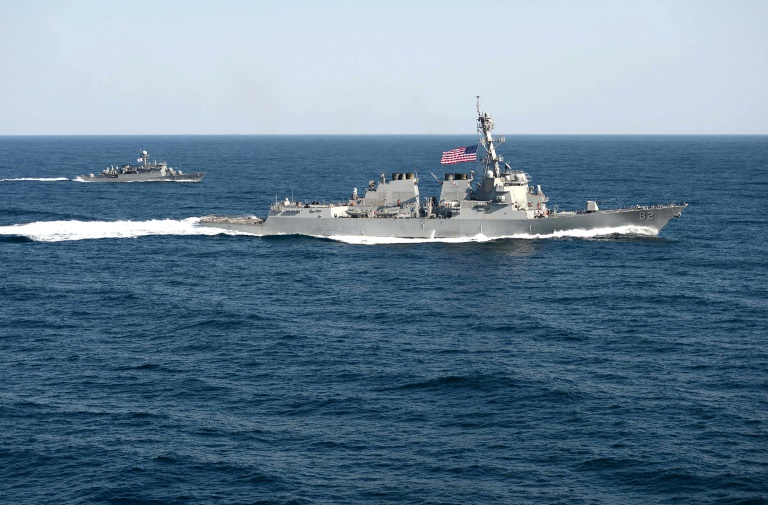 The US military will continue to operate “wherever” international law allows, a top US admiral said in Beijing on Tuesday, a week after America infuriated China by sailing close to artificial islands it is building in the South China Sea.

“International seas and airspace belong to everyone and are not the dominion of any single nation,” Admiral Harry Harris said, according to prepared remarks for a speech at the Stanford Center at Peking University.

“Our military will continue to fly, sail, and operate whenever and wherever international law allows. The South China Sea is not — and will not — be an exception,” he added.

Harris is the commander of the US Pacific Command and his public declaration in the Chinese capital is a mark of US resolve over the strategically vital waterway, where Beijing has built up rocks and reefs into artificial islands with facilities for military use.

Beijing claims sovereignty over almost the whole of the sea on the basis of a segmented line that first appeared on Chinese maps in the 1940s.

Harris described the claim as “ambiguous” and based on “the so-called 9-dash line”.

Washington has repeatedly said it does not recognise Chinese claims to territorial waters around the artificial islands.

The USS Lassen guided missile destroyer sailed within 12 nautical miles of at least one of the land formations in the disputed Spratly Islands last week.

Washington says it takes no position on sovereignty disputes in the region and that the sail-by was intended to protect freedom of navigation under international law, which it sees as potentially threatened by China’s activities.

The USS Lassen’s mission was part of the US’s “routine freedom of navigation operations”, Harris said, intended to “prevent the decomposition of international laws and norms”.

“Weâ€™ve been conducting freedom of navigation operations all over the world for decades, so no one should be surprised by them,” he said.

Harris’s comments come as part of a continued dialogue between Beijing and Washington over the contentious South China Sea.

He tempered his comments with conciliatory remarks, praising US-China ties and pointing out that Chinese and American ships were visiting ports in each other’s countries.

“Some pundits predict a coming clash between our nations. I do not ascribe to this pessimistic view,” Harris said, according to a copy of his speech.

“While we certainly disagree on some topics — the most public being Chinaâ€™s claims in the South China Sea and our activities there — there are many areas where we have common ground.”

Two days after the USS Lassen sailing, the chief of US naval operations spoke with his Chinese counterpart via video.

US officials said the call between Admiral John Richardson and Admiral Wu Shengli, who commands the Chinese navy, was “professional and productive”.

But China’s official Xinhua news agency paraphrased Wu as warning his counterpart: “If the US continues to carry out these kinds of dangerous, provocative acts, there could be a serious situation between frontline forces from both sides on the sea and in the air, or even a minor incident that could spark conflict.”

Beijing’s response to the USS Lassen sailing appears to have been carefully calibrated, with authorities expressing outrage, summoning US ambassador Max Baucus to protest, and saying they monitored and warned away the vessel — but without physically intervening.

China’s position on the islands is leading many countries in the region “to want to intensify their security cooperation with the United States”, US Defence Secretary Ashton Carter said Sunday in South Korea.

The Pentagon chief was in Kuala Lumpur on Tuesday for meetings with regional partners as part of America’s ongoing strategic “rebalance” toward the Asia-Pacific region.

A key theme of the trip is likely to be Beijing’s island-building in the South China Sea and its wide-ranging sovereignty claims.