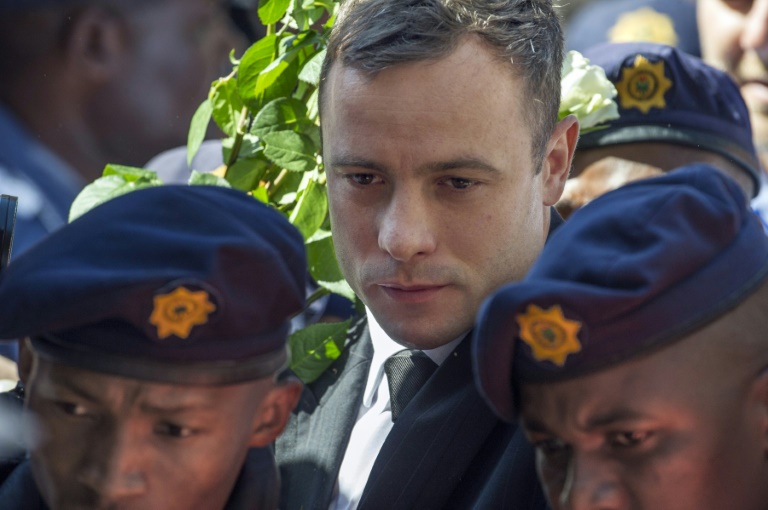 Oscar Pistorius’s lawyers on Tuesday fought to keep him from returning to jail as state prosecutors argued for a murder conviction in a combative appeal hearing held just two weeks after he was released.

The Paralympic sprinter was found guilty last year of culpable homicide — a charge equivalent to manslaughter — after shooting dead his girlfriend on Valentine’s Day in 2013.

During sharp exchanges between his lawyer and the five judges at the Supreme Court of Appeal in Bloemfontein, the killing was again re-lived in front of a packed courthouse that included Steenkamp’s mother June.

At the crux of the appeal was how the trial judge, Thokozile Masipa, interpreted the principle of dolus eventualis — awareness of the likely outcome of an action — under which she acquitted Pistorius of murder.

“When he fired the bullets, did he know there was somebody behind the door?

Pistorius’ lawyer Barry Roux battled back, arguing that the original trial verdict could not be challenged on its factual findings.

“(The judge) was saying: ‘I cannot find it under dolus eventualis… because my factual finding is that when he fired the shots thinking it was an intruder he genuinely believed the deceased was in the bedroom’.

“He genuinely believed he was in danger and that’s why he fired.”

State prosecutor Gerrie Nel argued that Pistorius should be convicted of murder as he intentionally meant to kill whoever was behind the toilet door into which he fired four bullets.

“Firing through the door at torso level into a small cubicleâ€¦ the foresight must be that someone would die,” Nel said.

The court concluded the appeal hearing before lunch, saying it reserved judgement on the case without giving a date when its decision would be announced.

Pistorius, 28, was released on October 19 — just one year into his five-year jail term — to spend the remainder of his sentence under house arrest at his uncle’s mansion in .

If he was found guilty of murder, he would face a minimum of 15 years in prison.

Pistorius, who has not been seen in public since his release, did not attend the hearing.

“We are saying he must stay in jail,” said Khosi Mojapi, a 33-year-old member of the Women’s League, outside the court building.

A lone Pistorius supporter held a sign reading “Hands off , Give a break.”

“We need to ensure everybody gets a second chance at life,” said Tokelo Africa, wearing a white fedora and navy suit.

Legal experts said it was difficult to predict the outcome of the appeal given the unexpected — and sometimes unprecedented — legal twists and turns that have characterised the high-profile case.

The court could alter the original trial verdict, and send the case back to the high court for a new sentence.

If the judges uphold the state’s appeal and find Pistorius guilty of murder, he could have just 48 hours to prepare for a return to prison.

Pistorius may also make his own appeal to South Africa’s Constitutional Court — the country’s highest court.

Pistorius shot Steenkamp, a model and law graduate, at the peak of his fame, following his historic performance in 2012 when he became the first double-amputee to race at Olympic level.

In the shooting’s aftermath, he lost his glittering sports career, lucrative contracts and status as a global role model for the disabled.

His release on house arrest after serving one-sixth of his sentence was in line with normal treatment of South African convicts, but was criticised by women’s rights groups and many others in the country.

Steenkamp’s family have said they may wish to meet with Pistorius to help them cope with her death.