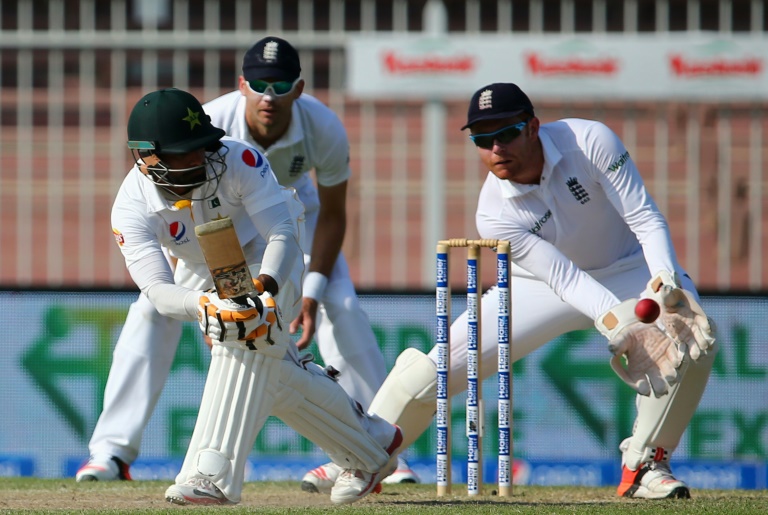 Pakistan started their second innings on a confident note, reaching 58-0 at tea on the third day of the third Test against England in Sharjah on Tuesday.

Openers Mohammad Hafeez (33) and Azhar Ali (24) were at the crease as Pakistan needed another 14 runs to overhaul England’s first innings lead of 72 at Sharjah stadium.

Earlier, off-spinner Shoaib Malik took a career best 4-33 as England were bowled out for 306 in their first innings, taking lead over Pakistan’s total of 234.

Pakistan were lucky not to lose Hafeez after Australian umpire Bruce Oxenford gave him caught behind off paceman James Anderson in the fifth over of the innings with the score on four.

But Hafeez, then on two, challenged the decision and got away on referral as television replays showed there was a gap between ball and bat, much to the relief of the Pakistan camp.

Hafeez has so far hit two sixes and a four in 72 balls.

England, seeking to level the three-match series after losing the second Test in Dubai and drawing the first in Abu Dhabi, lost their last six wickets on either side of lunch.

England’s last four wickets fell for 21 runs with Adil Rashid dismissed in the last over before lunch by Malik caught by Ali for eight.

Adil helped Patel add an invaluable 40 for the seventh wicket with Patel.

Patel, playing his first Test in three years, hit six well-timed fours to frustrate Pakistan before he was bowled by leg-spinner Yasir Shah who finished with 3-99.

Malik then had the wickets of Anderson (seven) and Ben Stokes (nought) to improve on his previous best of 4-42 be took against South Africa in Lahore in 2003.

Stokes, who suffered a shoulder injury on Sunday, batted at number eleven in an attempt to increase England’s lead.

When England resumed, on their overnight score of 222-4, their hopes of a big lead rested on theshoulders of Taylor and Bairstow but Rahat broke through in the fifth over of the day, forcing an edge off Taylor to wicketkeeper Sarfraz Ahmed.

Taylor’s 226-minute vigil had six fours and he added 89 for the fifth wicket with Bairstow who also didn’t last long.

Left-arm spinner Zulfiqar Babar had Bairstow with a sharp delivery which came with the arm as the batsman failed to connect a cut and was bowled.