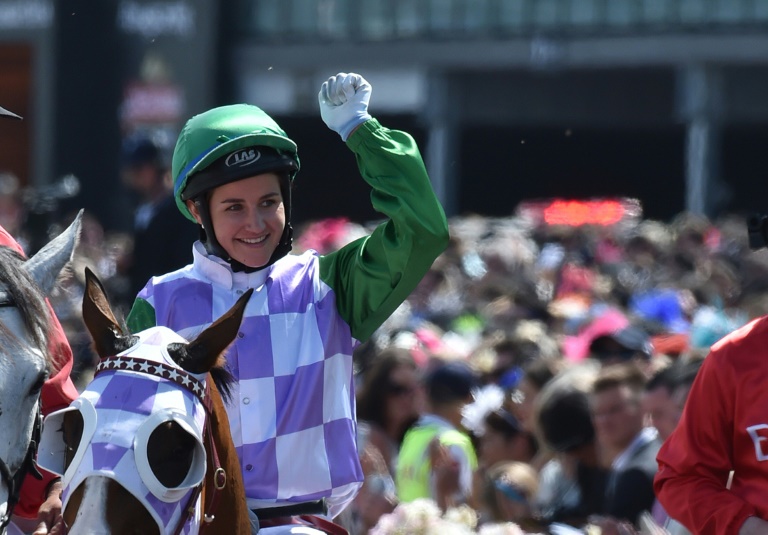 As a child, Michelle Payne dreamed of lifting the Melbourne Cup, and she finally achieved that Tuesday — despite horrific injury, chauvinism and a horse that was listed at 100-1.

In doing so, she became the only female jockey to win Australia’s “race that stops a nation”, and completed perhaps the biggest fairytale in its 154-year history.

“This is everybody’s dream as a jockey in Australia and now probably the world,” she said, celebrating with her stable hand brother Stevie, who has Down’s Syndrome.

While her mount Prince of Penzance was 100-1, Payne overcame even greater odds to win the world’s richest two-mile handicap race.

Payne, 30, the youngest of 10 siblings, was brought up by her father, Paddy, after mother Mary died in a car accident when she was six months old.

She comes from a family steeped in the racing industry, with most of her siblings working in the sport including Stevie.

But she has also suffered a litany of injuries — falling head-first from a horse when she was just 18, fracturing her skull and bruising her brain.

She persevered in the sport, even in the face of subsequent injuries including a broken wrist and ankle.

Injuries were not her own difficulty and Payne took time out from her celebrations to slam what she called a “chauvinistic sport”.

Payne thanked trainer Darren Weir and owner John Richards, then added: “And I want to say to everyone else, get stuffed, because women can do anything and we can beat the world.”

Even on the eve of what may have been her last race, after she talked of retirement this week, winning the Melbourne Cup seemed mere fantasy for Payne.

“I gave myself a little bit of time last night before I went to sleep to think if I won Melbourne Cup what I would say,” she said.

“And I sort of thought, ‘Don’t be silly’, but it’s nice to be able to dream. That’s what racing is all about — you can dream about anything.”

Payne’s family reportedly is keen for her to retire, and she admitted to The Sydney Morning Herald on Monday: “It’s probably going to be a bit sad to hang up the saddle.”

“I’ve had a hard life being a jockey, but it will be nice to wind down, have a family and train two or three horses,” she said.

“The (family) are all pretty happy to see me retire, but they’re very supportive.”

Payne was the only female jockey in the Melbourne Cup on Tuesday, and reportedly only the fourth woman rider in a race which dates back to 1861.

She had raced once before in the Melbourne Cup, which is watched by millions across Australia and worldwide, on the celebrated late trainer Bart Cummings’ Allez Wonder in 2009.

“It’s being patient. And I’m so glad to win Melbourne Cup and hopefully, it will help female jockeys from now on to get more of a go. Because I believe that we sort of don’t get enough of a go and hopefully this will help.”