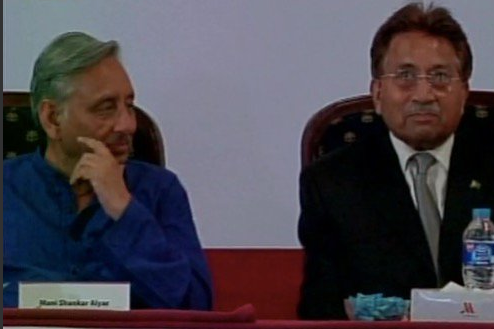 In matters of tolerance, and intolerance, the question that determines the discourse is: where does one draw the line.

Freedom of Expression is respected and granted by the state, but that does not mean that bonafide citizens of the country share the stage with avowed enemies of the nation. People who have launched war against the country, using non-state actors by their own admission, do not deserve any legitimacy.

Former Bharatiya Janata Party (BJP) leader Sudheendra Kulkarni and Congress leader Mani Shankar Aiyar may have just afforded some legitimacy to General Pervez Musharraf. In Pakistan on Tuesday to attend a book launch, the duo are currently in the dock for having shared the stage Musharraf.

To jog their memory, not more than week ago, Musharraf admitted that Pakistan funded terror group Lashkar-e-Toiba, nurturing militancy in the contentious state of Jammu and Kashmir, over which the two countries have been fighting since independence.

To remind them again, just about 24 hours ago, two army personnel were killed in a ceasefire violation from across the border. This is not about shrill jingoism, but about respecting the sentiments of a country, which has suffered many a blow due to the neighbour’s use of non-state actors. We have hit back, too, in equal measure and sometimes more.

Bottomline: We are not in talks with Pakistan due to irreconcilable differences. To maintain peace at the border, thousands of soldiers toil day in, day out, in rain, shine, or hail. A photo-op like this disrespects the spirit of the soldier and of the country.

As the country debates intolerance, one is left wondering if Kulkarni, and Aiyar were a bit too tolerant today.