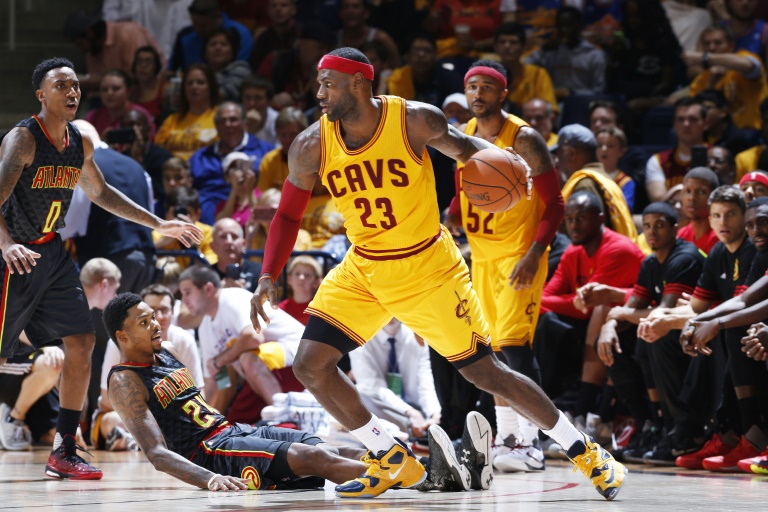 Cleveland Cavaliers star LeBron James soared to another NBA milestone, jamming home a dunk against the 76ers in Philadelphia to become the youngest player to score 25,000 points.

James scored 22 points — that’s 25,001 for his career — with 11 assists and nine rebounds and received a standing ovation from the Philly crowd when his achievement was acknowledged during an ensuing timeout.

“Obviously, they’re Sixer fans to death, but they know and they respect the game of basketball,” James said. “To get a standing ovation reaching that milestone, it was very special.”

“To be the youngest player in the history of the game to score 25,000 points — particularly when you’re every bit the passer that you are the scorer — is just a testament to his greatness,” Blatt said.

Kobe Bryant was the prior fastest player to the plateau, reaching it in 2010 at the age of 31.

Among active players, the Mavericks’ German star Dirk Nowitzki, Tim Duncan, Kevin Garnet and Paul Pierce are the only others to have reached the plateau.

“For me, winning basketball games and then reaching milestones individually is a pretty cool thing, but obviously the team aspect comes first,” James said before the game. “But anytime along that line you’re able to reach a milestone, it’s very humbling.”

Cleveland’s Australian guard Matthew Dellavedova lobbed the pass that produced the milestone, and James departed the game soon after.

Guard Mo Williams added 21 points for the Cavaliers, who won their third straight game to improve to 3-1 for the young season.

Forward Kevin Love had 15 points and eight rebounds for Cleveland, who trailed by as many as 15 points in the first half but outscored Philadelphia 25-4 in a one stretch bridging the second and third quarters.

Dellavedova had 12 points, nine assists and five rebounds for the Cavs, and guard/forward James Jones chipped in 12 points.

Rookie center Jahlil Okafor scored 24 points to lead Philadelphia, who despite his exploits fell to 0-3.

The 76ers led by as many as 15 in the second quarter, when Okafor scored eight of his 14 first-half points with an electric display that included posting up to score over Love and dribbling past Timofey Mozgov to nail a jump shot.

James scored three points and assisted on two more buckets in a 10-2 Cavs run that cut the Sixers’ lead to 54-49. The Cavaliers scored the first nine points of the second half to take the lead for good.

“We got jumped by a great team in the third period,” 76ers coach Brett Brown said.

San Antonio’s ageless center Tim Duncan notched yet another milestone, scoring 16 points and grabbing 10 rebounds in the Spurs’ 94-84 victory over the New York Knicks that gave Duncan 954 career wins — the most for any player with one NBA team.

Duncan notched the 831st double-double of his career. He’s fifth on the all-time list in that category behind Kareem Abdul-Jabbar recorded 885 career double-doubles.

As Duncan was adding yet another double-double to his resume at Madison Square Garden, Knicks rookie Kristaps Porzingis of Latvia notched the first of his career with 13 points and 14 rebounds before exiting with an apparent neck injury minutes from the end. Porzingis was diving for a loose ball when leaping teammate Carmelo Anthony came down on his head. Porzingis, obviously in pain, remained on the floor for several minutes before walking gingerly to the locker room.

James Harden rediscovered his shooting stroke, scoring 37 points to lead the Houston Rockets to their first victory of the season — 110-105 over the Oklahoma City Thunder.

Ty Lawson had his best game since joining the Rockets, adding 14 points with 11 assists and four steals to help last season’s Western Conference finalists rally from a 15-point deficit for the victory after three straight defeats to open the season.

Rockets center Dwight Howard scored 16 points and pulled down eight rebounds, draining two free throws to seal the victory over a Thunder team that got 29 points from Kevin Durant and 25 from Russell Westbrook.