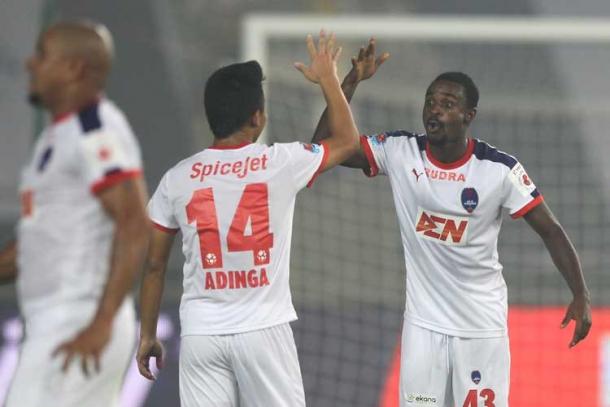 In-form striker Richard Gadze propelled Delhi Dynamos into lead with a 37th minute goal against the run of play.

Desperately seeking to get the equaliser and stay afloat in the competition, Northeast United found their man in Simao, who restored parity with a spectacular free-kick in the 72nd minute.

As the ball curled into the net leaving Dynamos goalkeeper Antonio Doblas clueless, the huge army of Northeast United fans who had trooped into the Jawaharlal Nehru Stadium in large numbers, went berserk.

The Mexcian wave was witnessed a couple of times but the new torch wave was on a display often, with the crowd switching on their mobile phone torch as stretching it full length.

Earlier, Delhi Dynamos took the lead when Gadze struck an opportunistic goal minutes before the first half ended. Former French international Florent Malouda gave what proved to be a perfectly weighted through ball and the Ghanian made no mistake as he shot the ball past the charging NorthEast United custodian TP Rehenesh.

Placed seventh in the standings prior to this match, the visiting side drew level when Simao, seconds after he replaced Diomansy Kamara, curled the ball enough over the Dynamos wall into the left of the net, leaving Doblas shocked and the NEUFC supporters delighted.

The free-kick was a result of a foul committed by experienced Dynamos midfielder Hans Mulder, who brought down Diomansy Kamara from behind on the edge of the box. The Northeast United players appealed for a penalty but the referred gave a free kick.

NorthEast United FC shone in the beginning but the defense of the Delhi Dynamos FC was up to the task. The visitors could not find a way past the disciplined centre-back pairing of John Arne Riise and Anas Edathodika.

Doblas deserves some credit as he kept NEUFC at bay with three saves in the first half. To start with, the goalkeeper from Spain blocked Sanju Prad’s shot and then prevented Francis Dadzie from getting into the scoresheet by blocking his attempt off the rebound.

The goalkeeper was not done yet as he saw Diomansy Kamara s shot narrowly missing the target.

In the stands, British boxing star Amir Khan was the star attraction of the match that started half an hour late due to poor light.