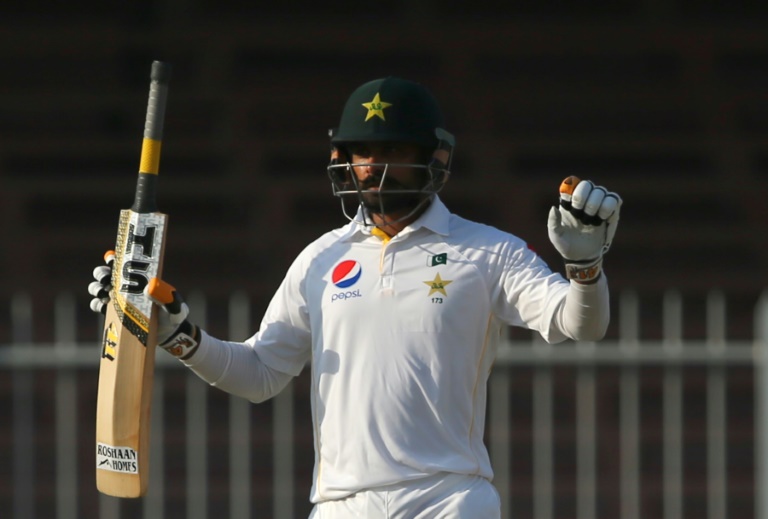 Opener Mohammad Hafeez scored a brilliant unbeaten 97 under pressure as Pakistan fought their way back into the third and final Test against England in Sharjah on Tuesday.

The 35-year-old was just three runs away from his ninth Test hundred at close of play on the third day at Sharjah, with Pakistan on 146 for three, leading by 74 runs.

Nightwatchman Rahat Ali was the other not out batsman (0) after coming in to replace Younis Khan, trapped leg-before for 14 by fast bowler Stuart Broad with just two overs to go in the day.

Hafeez held the innings together well, smashing nine boundaries and three sixes during his aggressive 155-ball knock as Pakistan look to protect their 1-0 lead in the three-match series.

Pakistan won the second Test in Dubai while the first Test ended in a draw in Abu Dhabi.

Earlier, off-spinner Shoaib Malik took a career-best 4 for 33 as England were bowled out for 306 in their first innings, earning a 72-run first-innings lead. James Taylor top-scored with 76.

Pakistan were lucky not to lose Hafeez after Australian umpire Bruce Oxenford gave him out caught behind off paceman James Anderson in the fifth over of the innings with the score on four.

But Hafeez, then on two, challenged the decision and got away on referral as television replays showed there was a gap between ball and bat, much to the relief of the Pakistan camp.

“We needed a good start and I am happy that Ali and I gave that,” said Hafeez. “We need to bat like this tomorrow as well to post a challenging target for England and I am hopeful that we will do that.”

The Pakistan openers put on 101 for the opening wicket — only their second 50-plus opening stand in Sharjah. Hafeez completed his 13th Test half-century with a boundary off Samit Patel and then hoisted James Anderson for a six.

Azhar Ali was unfortunate to be run out for 34 as he drove spinner Adil Rashid to extra cover and saw Hafeez scampering for a single. Ali reacted late and was run out at the non-striker’s end.

Malik, who scored a brilliant 245 in the first Test, was caught napping by a sharp inswinger from Anderson, which struck him right in front of the wicket.

Earlier, it was Malik’s off-breaks that derailed England, who were unable to establish a big lead.

Rashid helped Patel add an invaluable 40 for the seventh wicket before England lost their last four wickets for 21 runs.

Patel (42), playing his first Test in three years, frustrated Pakistan before he was bowled by leg-spinner Yasir Shah, who finished with 3-99.

Malik then took the wickets of Anderson (seven) and Ben Stokes (0) to improve on his previous best of 4-42 he took against South Africa in Lahore in 2003.

Stokes, who suffered a shoulder injury on Sunday, batted at number 11 in an attempt to increase England’s lead.

When England resumed, on their overnight score of 222-4, their hopes of a big lead rested on the shoulders of Taylor and Jonny Bairstow but Rahat broke through in the fifth over of the day, forcing an edge off Taylor to wicketkeeper Sarfraz Ahmed.

Taylor’s 226-minute vigil included six fours and he added 89 for the fifth wicket with Bairstow (43), who also did not last long on the third day.

Left-arm spinner Zulfiqar Babar claimed Bairstow’s wicket with a sharp delivery which came with the arm as the batsman failed to connect with a cut shot and was bowled.