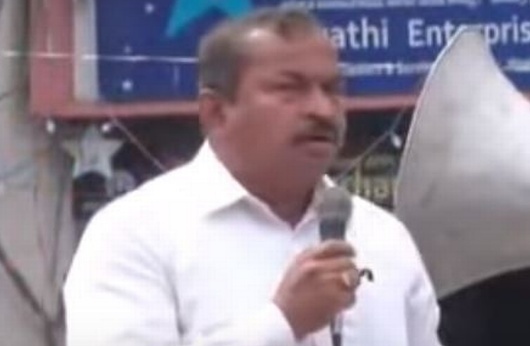 BJP leader SN Channabasappa, who had threatened to behead Karnataka chief minister Siddaramaiah over ‘beef remark’, has been arrested for his “provocative” and “intimidating” remarks.

Channabasappa, a former president of the erstwhile Shivamogga City Municipal Council, made the remarks on Monday evening during a protest organized by the local party unit against Siddaramaiah’s reported comment on beef eating last week.

“How dare you lay your hands on the neck of Gomata? You are openly saying with a dictatorial attitude that you will eat cow meat… If you have the guts, you come here and eat at Gopi Circle (in Shivamogga), then, let there be no doubt that on that day, you will be beheaded,” Channabasappa said.

“… Are you playing with the emotions of Hindus? Don’t do it…,” warned Channabasappa, who was arrested today for his remarks which were described by the Chief Minister as “a provocative statement.”

Channabasappa has been booked under IPC Sections 153 (Wantonly giving provocation with intent to cause riot), 353 (Assault or criminal force to deter public servant from discharge of his duty) and 506 (Punishment for criminal intimidation), superintendent of police Ravi Channannavar said.

“It is a provocative statement. I will ask the police to inquire into it. If it is true, they will definitely take action,” Siddarmaiah had said earlier.

“If I say I will eat, how will it harm majority community? Don’t we eat other kinds of meat?,” the CM had said adding, “… food habit is an individual’s choice and should be left to them; no one should interfere with it. Interfering and attacking one’s rights is not correct. It is against the Constitution. It is against individual liberty, it should not be done … ”

At a general body meeting of the Karnataka Youth Congress last week, Siddaramaiah had reportedly said, “Till date I have never eaten cow meat. But if it suits my palate and if I want to eat beef, I will eat it. Nobody can stop me.”